Visually stunning! You’re missing out if you do not choose to see Alpha in IMAX this weekend. The experience of many movies does not significantly change between standard and IMAX screenings, in my opinion; but because of the sweeping landscapes in Alpha, you’ll certainly want to experience it IMAX. However, I do not recommend watching it in 3D. The advanced screening to which I was invited was 3D, and I feel strongly that the cinematography is better appreciated in 2D. Alpha is one of those films that flies under the radar because it is quite niche in nature. Ordinarily, I am just as excited to see the smaller films as the big ones; but this is even a film that I wasn’t thinking much about. The power of visual storytelling is felt in this film that is set shortly after the last ice age, for there is minimal dialogue. And the dialogue that is in the film, is found in the subtitles because the film is in an unfamiliar language. Neither the foreign tongue nor the subtitles take away from the film. In fact, the absence of English and the minimal dialogue enable the audience to focus on the action. If you’re a dog lover or simply interested in anthropology, then this is a film for you.

Alpha tells the story of how the wild dog (or wolf) became man’s best friend. Taking place at the end of the last ice age, a northern European tribe of men is making the arduous journey across the tundra to the sacred hunting grounds where the bison roam before the first snow. On his first tribal hunt, Keda, son of the chief, is put to the test to evaluate his ability to provide for himself and his family, and eventually his tribe. While he “leads with his heart more than the spear” as his father notes, he father believes that he will make the tribe proud. Following a tragic accident during the hunt, Keda’s father and tribe fear him dead and must return to the settlement before the blistering winter sets in. Waking from a coma on the side of a cliff, Keda is determined to make it back to his home. Facing a perilous journey, he must pull on all the lessons he learned from his father in order to survive the vicious frontier. Along the way, Keda encounters a lone wolf left for dead, abandoned by his pack, with whom he develops a friendship after many weeks, and both help each other, against all odds, remain alive in the treacherous wilderness.

If you can make it through the first act, then you will greatly enjoy this intense film. Thankfully the first act was edited in such a way that is does have a hook at the beginning, but the remainder of the first act is relatively slow compared to the rest of the film. Acts two and three, provide audiences with a gripping story of survival against the elements and unforgiving landscape. Diegetically, Alpha is pretty straight forward high concept plot that is simple to grasp. Survival. However, due to the simplistic plot, the film is able to dive deep into character development. Simple plot, complex characters. Much like with A Quiet Place earlier this year, Alpha is a testament to the power of visual storytelling. The juxtaposition between the vast open vistas, hills, and valleys and the intimate story between Keda and Alpha, is fantastic. Quite the contrast. The stories of Keda and Alpha parallel one another, as both were left for dead by their respective tribes. In the tribes’ defense, both were genuinely thought to be dead. Alpha must work though wild instincts to trust Keda, as Keda is working to rehabilitate Alpha; likewise, Keda must work through his own weaknesses to teach himself how to survive and trust Alpha. Overcoming adversity and establishing trust are themes through the story. Even though the end is predictable, your attention is still captured for the duration of the film to witness just how Keda and Alpha are going to survive. The ending does hold a surprise for the audience, and for the characters I might add.

For lovers of anthropology or our canine friends, this is definitely a film that you will enjoy. Although the film has a PG-13 rating for intense moments, I would rate it PG. The film also possesses an inspirational nature about it, because we have all found ourselves in the wilderness trying to survive. Maybe we haven’t been stranded in the unforgiving tundra, but metaphorically we have been there. 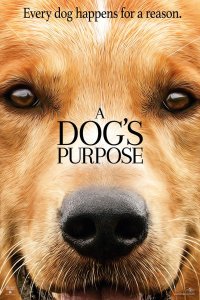 You’re going to need tissues! Ever wonder what your dog was thinking? You’ll find out in Universal, Amblin Entertainment, and Walden Media’s glorified Hallmark movie that follows the soul of a loving dog. As such, A Dog’s Purpose is one of those films that is so simple yet emotionally touching. Based on the novel written by W. Bruce Cameron, this movie will tug at even the toughest of hearts. Although the film does not follow a traditional diegetic arc, three-act structure, and is filled with constant verbal exposition in the form of a voiceover, it is still enjoyable and works as a great date movie. No critical thinking required. Still, the author’s tagline “a novel for humans” can be seen in the social commentary on primarily human relationship dynamics followed by the relationship between a pet and his or her owner. Filled with moments of laughter and tears, A Dog’s Purpose is a film that everyone who either has or has ever had a dog should see. If you’re a cat person like me, then there isn’t much here for you–sorry. However, I was moved to tears during a scene in which the focus was on a human romantic relationship getting rekindled. You will never look at your dog the same way again and will likely go home and hug him or her just as a friend of mine did after she screened the film with me.

A Dog’s Purpose is about a dog who discovers the purpose for his existence as he is reincarnated into different dogs over the course of his life. Finding himself part of different families–or as he likes to refer to them–as packs, Bailey does his best to affect humans by influencing their respective needs to laugh and love.

Despite the rather two dimensional nature of A Dog’s Purpose, there is a deeper theme within the mostly shallow story if you examine the film closely enough. Not shallow in that there lacks emotional appeal or enjoyment, but shallow in that there is very little that is complex and dynamic in the narrative. Although Bailey spends most of his on screen life with Ethan (K.J. Apa), Bailey’s soul finds itself in other dogs who are part of their own respective family. Doing a close reading of the film reveals that each family unit represents a different kind of relationship dynamic or lack thereof. I won’t spoil it by describing each type of relationship, but knowing that there is social commentary on human and pet relationships could likely increase the appeal and enjoyment of the film for those who prefer movies with a more cerebral plot. Interestingly, the movie includes families/human relationships that represent a good cross-section of the types of relationship dynamics that exist in our lives.

For those who typically enjoy Hallmark movies, then you’ll definitely enjoy this one. Last January we had glorified Lifetime movies and this year it must be Hallmark’s turn. As I have not read the novel, I cannot comment on differences between the book and the film adaptation.