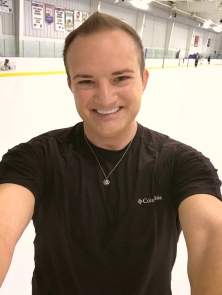 Hi there! Thanks for stopping by my blog. You’ll find many articles on film, theme parks, horror, and television. My favorite genre is horror, so a large portion of my content is devoted to exploring the fascinating world of the American Horror Film. Horror is also my scholarly area, and I share that love with my students, fellow critics, and other horror fiends!

I hold a Master of Arts degree in Media Studies (with a concentration in cinema and themed entertainment) from the University of South Florida. My research area is on the convergence of cinema and theme parks. I explore ideas such as narrative, spectacle, character, and setting in terms of movies and themed entertainment. Learning how to successfully translate an idea of intellectual property from one medium into another is the primary goal of my predictable model for creative design that affects both theme parks and the cinema. My undergraduate degree is in film studies, and I developed a greater critical understanding of cinema as a result of my undergraduate program.  I have found that I equally enjoy studying both themed entertainment and cinema, so I am sharing that love and passion with you. I hope you find enjoyment in my rather prolific reviews of movies and themed entertainment each week. Even though they tend to be a little scholarly, I try to write in such a way that anyone can understand. What good is an idea or point of view, if one cannot communicate to the general public? I like including many details that give you a good representation of the various elements that make up a film or components of themed entertainment.

As much as I enjoy writing, I do have to pay the bills. So I work full-time in creative services for a well-known live entertainment company and teach screenwriting at The University of Tampa. In addition, I also freelance for a small NPR show and write/produce on the side. Usually working on a project or two. I am quite active on social media, so please follow me on Twitter and Instagram. I am also quite active in the PodernFamily! You may have heard me on your favorite film, theme park, or horror podcast. I am often available to guest on shows, so just send me an email or hit me up on Twitter. My hobbies include attending the cinema most weeks, frequenting the theme parks of Central Florida, and figure skating.

I enjoy making new friends and contacts through my blog, so feel free to connect with me 🙂

6 thoughts on “About Me”