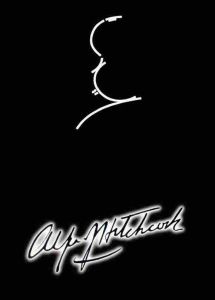 More than an instantly recognizable silhouette. Before the idea of a director branding him or herself became as common a goal as it is today, Alfred Hitchcock pioneered the very concept of a director developing a brand that would instantly be recognizable by millions. Not only was Hitch the Master of Suspense, and still is, but he was also a master of marketing. Unknown to many, Hitchcock worked in sales and marketing before he became one of, if not the, most recognizable name in cinematic history. Between his experience in marketing and with silent filmmaking, he was a master of captivating visual storytelling way before his most well known works of cinema. I teach media and screenwriting at the University of Tampa, and I’ve often told my students that writing a compelling, memorable, effective thirty-second commercial can be more difficult than writing a two-hour film. I realize that illustration overly simplifies the respective concepts; however, the idea is that if you can proficiently tell an intriguing or impactful story in thirty-seconds, then you can proficiently write a two-hour movie. Taking what worked well in advertising and marketing, and adapting it to a cinematic diegetic structure, Hitchcock was able to capitalize on his penchant for visual storytelling and ability to prompt desired physiological and emotional responses from the audience. The American Marketing Association defines a brand as “a name, term, design, symbol, or any other feature that identifies one seller’s good or service as distinct from those of other sellers.” The fact that Hitch’s name and silhouette have instant meaning, definition attached to them, is evidence enough that he was a master of branding.

Prior to understanding just how Hitchcock became the first director to brand himself, it is paramount to understand how a brand–more specifically brand recognition–comes to exist in the first place. A simplistic method of understanding what defines a brand takes the form of a relationship between an image (or idea) and the individual. Relationship is key. There is an emotion attached to the relationship between the image and the products or services that it represents; moreover, this relationship is not without a practical component such as cozy fur-lined boots or an automobile with consistent impeccable quality. By extension, the relationship between an individual and a brand can create a sense of importance, safety, or class. Once a relationship is formed, then the individual experiences both physiological and emotional reactions to the sight or sound of the image or idea. Think of that feeling you get when you see the Disney castle or hear “Wish Upon a Star.” Or perhaps, imagine how you feel or react when you see a BMW or wear a Rolex. These are iconic brands that mean something to many individuals. The mere exposure to the sight, sound, or message will prompt a comprehensive response within the mind and body. As the maxim goes, “imitation is the highest form of flattery;” therefore a quality, successful product or service will be copied but never fully replicated because there is always a secret ingredient that makes the original unique. In addition to the aforementioned, when an image or idea becomes a recognizable brand, then there is a power endowed upon that image that gives that company (that owns the image, product, or service) a kind of soft power that cannot easily be quantified but it’s quite real and figuratively measurable.

Not unlike Rolex, BMW, and Disney, Alfred Hitchcock was and is also a brand–and a powerful one at that. He was the first director to become a brand; and since then, others have tried to brand themselves as well. Some with success and others with defeat. One of the keys to Hitchcock’s ability to combine the words of marketing and filmmaking in order to not only develop a reputation but become a brand, Hitchcock recognized early in his career (especially after coming to the United States) the importance of promoting himself–his actual image–in conjunction with the promotion of a particular film. He demonstrated a clearly intentional desire to ensure that his name was at the forefront of the conscious of the American public. When a particular director, who consistently delivers quality or groundbreaking films, links the outstanding performance of the films with his or her image, then the mere sight of or name of that director carries priceless value. Following the breakup of the studio system over the late 1940s through the 50s, there arose an increased opportunity for to claim authorship of a motion picture. Prior to the decentralization of Hollywood, most movies were completely packaged by the Studio/distribution company, with the director playing a minor role. With the new opportunities to connect a motion picture to the director during marketing, it paved the way for directors to advance their own careers as well as the success of the movie. As studio authorship decreased, individual (director or producer) authorship increased!

According to Janet Staiger in her essay Creating the Brand: the Hitchcock Touch, she outlines four significant criterion that apply to image or brand as it relates to showbusiness. (1) the character persona that is created by selection of performances in film, tv, web media, etc (2) the performer (acting ability) in those mediums (3) the worker/laborer that develops from what is learned about the individual’s professional life in respect to business dealings and (4) the private persona that derives from the individual’s off-camera personal life. Whereas these criteria are more aligned with an actor or actress, these elements can be applied, by extension, to understanding Hitchcock as a brand. Hitchcock’s character can be seen through his genre selection–the types of films that a director authors. Think of his genre selection as the equivalent of the types of characters an actor or actress chooses to play. We recognize the performer element in Hitchcock’s consistent ability to direct the motion pictures with incredible precision and innovate programming for then-new mediums like television. Hitch’s worker/laborer attribute is found in what we know about his behind-the-scenes work on set and in the business offices. Most famously is his near-departure from Paramount when he went to make Psycho, for which they earmarked zero funding. He self-financed the iconic film and used his Alfred Hitchcock Presents crew. Passion, determination, and commitment witnessed. In terms of his private persona, Hitch was famously a practical joker and a family man. In fact, his daughter appeared in multiple episodes of Presents. All these elements together combine to create Hitchcock’s image.

But there is more to branding oneself than crafting an figurative or metaphysical image. There is the physical image that is recognized by the naked eye. After injecting himself into film social circles comprised of well-established directors, screenwriters, and even critics and journalists, he had a well-known name. And even though a name can carry power, it needs a tangible representation. Although one may assess that Hitchcock came up with that trademark minimalistic nine stroke silhouette, the inspiration came from a series of director sketches that appeared in The Motion Picture Studio journal in 1923. There, we have a group of then and now famous directors with Hitch appearing sideways with his famous belly out and hands in his pockets. By the 1930, Hitchcock was being heralded as a master of suspense. And that description of Hitch’s work continued until the moniker stuck in perpetuity.

In addition to the soon-to-be-moniker, film magazines took notice of his notable weight. By the late 1930s, it is said that Hitch already weighed in excess of 300lbs. As the maxim goes, “there is no bad publicity,” and that can definitely be witnessed in how Hitch’s brand continued to develop during his early days in America. The constant articles about his weight, the unprecedented success of his films, his cameos in those films, and sketched of Hitch, all those elements together created Hitch’s image. You can very much liken the evolution of the Hitchcock figurative image and physical logo to the evolution of Walt Disney’s image and either the Mickey ears or castle logo. Whereas the content of the motion pictures that both produced/directed respectively are quite different, they share one important element in common. They both injected themselves into the production and marketing of their work as much as possible. Although Walt Disney made himself into a brand (most solidly after Snow White), it was Hitchcock who was the pioneer in the very idea of a director creating his (or her) recognizable brand. In many ways, Walt follow Hitch’s direction to make his brand. But where did the famous nine stroke sketch come from? Well, according to author Robert Kapsis in his book Hitchcock: the Making of a Reputation, he drew the sketch himself in 1927 for the purpose of making it into a gift for his friends and colleagues. He created a wooden jigsaw puzzle with the iconic image an placed it in a small linen bag. I cannot think of anything more Hitchcock. This parallels how Hitch injected himself into his cinematic work both in the story itself, as a cameo, and in the marketing of his films.

Hitchcock knew that to create a brand–as everything he has accomplished for this result has been completely intentional–he needed to make a connection between his films and himself, and then himself to his name, and his name to the abstract profile. Then when someone sees the logo, they are immediately predisposed to feeling a certain way about Hitch and his films. It’s a bi-directional highway, so to speak.

4 thoughts on “Alfred Hitchcock: the First Director to Brand Himself (Part 1)”