Plot and story take a backseat to the technical and performative elements of the mise-en-scene. The Night House represents a trend in horror that began as an emerging art house cinematic form championed by studios like A24 in the mid 2010s, continuing today. Many of the films that fall into this category are highly stylized through overtly artistic approach (artistic in that the hand of the auteur is clearly visible) or a minimalist approaches. While many of these films DO have a strong story told though established narrative conventions, some of them (and an increasing number) place so much emphasis on the look and feel of the film, that the filmmakers forget that they also need to tell a good story with a beginning, middle, and end that makes sense within the world that has been established on screen.

This house looks gorgeous, but the bones are weak. The Night House certainly delivers a haunting and unnerving atmosphere, excellent production design, fantastic editing, and a tour de force performance by Rebecca Hall, but its labyrinth-like plot and meandering story ultimately lead to “nothing.” If nothing else, this film works as a showcase for Hall in her one-woman show! And no mistaking it, her performance is outstanding–nearly Toni Collette Hereditary levels. Further notable elements in the film are the exquisite editing and cinematography that help to generate the ominous feeling of dread that you will feel the entire time. All of the aforementioned sounds like an incredibly effective mise-en-scene, doesn’t it? The problem with The Night House isn’t in the mise-en-scene as much as it is in the bones of the house itself, or the screenwriting.

My problem with films like The Night House, The Lighthouse, (am I sensing a trend here?) and others is the trend to ostensibly convince audiences, through the thoughtful craftsmanship of the mise-en-scene, that the film is more important than it is, that it has something substantive to deliver, or that the filmmaker is elevating horror (a term I despise because horror has always been the most truthful and progressive of all the genres). When this happens, the plotting suffers greatly. Why? Because the filmmaker considers themselves an artist that is above established conventions because there is a clear attempt to be unconventional, to be be a nonconformist, to rage against the system, if you will. So because they do not feel that they should abide by the guidelines or conventions of screenwriting or image montage (montage is French for assembly), they expect audiences to be so impressed by the gorgeous imagery on screen that the story or plot is of little consequence. Or there is the idea that these films aren’t for everyone or they are used as fuel for the pretentious you just don’t get it conversations on #FilmTwitter. Oh, many cinephiles just love that one, because they can elevate themselves.

Now, you are probably wondering if I think all films need to follow conventional filmmaking approaches. And the answer is NO. What?!? Did I just contradict everything I just wrote? Again, no. It’s when the filmmaker crafts a motion picture that they’ve clearly positioned to give the pretense that it’s more important than it actually is and fail to deliver the story that is so clearly attempting to be told. That is where I find fault with the filmmaker or screenwriter. Does that mean narrative/fictional films can’t be poetic in their form? Certainly not. One of my favorite horror films is Dario Argento’s Suspiria. And, even though I include this masterful work of cinema in my World Cinema class, I will also be the first to tell you that the plot is not very good. But, the beauty of Suspiria isn’t in the story, but in the euphoric experience of watching Argento create cinematic art with this violent, technicolor world accompanied by the mesmerizing score. The difference between Suspiria and The Night House is the simple fact that Argento did not create Suspiria to tell an important story. It’s a film that has grown in importance through the decades because we can find meaningful expression in the mise-en-scene. But that film didn’t hit cinemas to tell an important or thoughtful story. It hit cinemas to provide an experience!

What we have here is spectacle vs narrative. A subject I covered in my academic book On the Convergence of Cinema and Theme Parks. In the book, I look at the storytelling approached in themed entertainment when it intersects cinema. Without going too deep into that subject, I explore the idea of cinema of attractions. And films that do not tell a plot-driven story, are more about the attraction or experiential factors, not unlike a theme park attractions. With the increase in IP (intellectual property) based attractions (think: attractions based on movies), attractions have integrated story elements that aim to take the physiological experience and add the dynamic of story to it. A good example of this is found in Universal Orlando’s Hagrid’s Magical Creature Motorbike Adventure in the Wizarding World of Harry Potter: Hogsmeade at Islands of Adventure. Universal coined the term story-coaster. But I digress. When I evaluate a film, I often look at the implied attempt by the director (and marketing agency or distribution company), and I ask myself questions like: does the film give the impression that it is more important than it actually is? Is there an attempt to have a thoughtful message or some social commentary on dominant or emerging ideologies, and the film form takes precedence over the actual story? Are the films technical elements and acting so impressive that it hopes you don’t notice that the plot or story are weak?

While I have established that there is rightly a place amongst the greats for films that are visually stunning that don’t necessarily follow a traditional story structure (ie. Suspiria), the best films are often those that have a simple plot and complex characters. A simple plot forms the solid foundation and structure of the house (the bones, if you will), while the film form is everything that you see with the naked eye. It starts with the firm foundation and strong structural elements. Everything else is window dressing–important–but ultimately meaningless if the narrative is’t sound. What good is the building material of the walls, the paint, the type of windows, or kitchen cabinetry if the foundation or structure are weak??? I appreciate the intimate feel of the trend to release films that look artful so we can witness the cinema stylo of the auteur, but the filmmakers also need to remember the importance of plotting, pacing, and structure.

Ryan teaches American and World Cinema at the University of Tampa. If you like this article, check out the others and FOLLOW this blog! Interested in Ryan making a guest appearance on your podcast or contributing to your website? Send him a DM on Twitter or email him at RLTerry1@gmail.com! If you’re ever in Tampa or Orlando, feel free to catch a movie with or meet him in the theme parks! 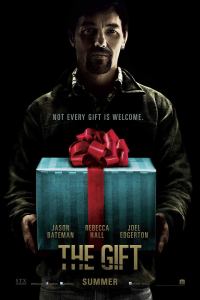 Who knew a slow-burning plot could be well-paced at the same time. The Gift is the latest movie released by Blumhouse and performed quite well over the opening weekend. Although billed as a suspense/thriller/stalker movie, it plays as a dark drama with a few intense jump scares. Unlike many movies in this sub-genre of horror, this one is surprisingly well-directed and written. In fact, there was only one exchange of dialog that I felt was extremely OTN (“on the nose,” meaning stating the obvious). Structurally, the plot is solid and leaves very little time for the audience to grow restless. Another interesting component to the movie is being predisposed early-on to side with and feel particular ways about the respective characters; but then after some big reveals, you begin to question your allegiance and favoritism. Perhaps you may find yourself rooting for whom you first admonished. There is much that is left up to interpretation, but not in a way that leaves you feeling negatively about unanswered questions. It’s one of those horror movies that encourages you to think differently about situations and characters.

The Gift is about Simon (Jason Bateman) and Robyn (Rebecca Hall) who move to LA for Simon’s new job. Relocating from Chicago, Simon and Robyn are excited to buy their new mid-century house and develop a life in a new city (which is actually childhood home of Simon). During an ordinary shopping excursion to a homewares store, the couple runs into a former high school classmate of Simon’s named Gordo (Joel Edgerton). After several conversations and a dinner invitation, Simon begins to suspect that there is something not quite right with Gordo and tells Gordo never to visit them again. Despite the harsh treatment from Simon, Gordo leaves gifts for the couple on their front porch, only some gifts should remain wrapped.

Other than a couple jump scares and eerie music, the movie is more of a mystery/drama than a thriller. It lacks that visceral thrill that curdles the blood throughout the movie. But despite that, it’s incredibly well paced and written. The excellent direction did not go without notice. Often times, movies that feature the director in a principle acting roll suffer because it is very difficult for a director to focus on orchestrating the storytelling and acting at the same time. Joel Edgerton is nearly unique in his demonstrable ability to successfully tell a visual story and deliver excelling acting. My only negative critique to the writing and the directing is the blatant absence of a climax/showdown. I was expecting something big to happen toward the end of the movie, in which the culmination of all the reveals and investigations come to fruition; but I was disappointed and felt unsatisfied with the resolution. Even though this is a different take on the whole stalker concept, I feel that the plot should have included a showdown in order to add a definitive thrilling element to the story.

Sometimes I think I know how a movie is going to play out; and often times, through my research and productions of my own, feel confident in my ability to read a movie through the trailer and the advertising. Not the case with this one. Honestly, I was expecting another Lifetime movie trying to make it big in the cinema (much in the vein of January’s Boy Next Door); however, I was pleasantly surprised and mostly happy with how this one played out and how well it was directed. It definitely leaves you to interpret actions, in the movie, for yourself and it also contains some very cool symbolism and subtext.