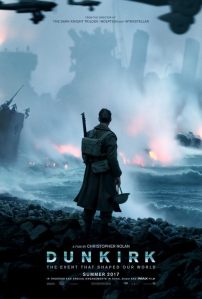 Journalism meets cinematic visual storytelling. Christopher Nolan’s war epic Dunkirk provides audiences with a different kind of war movie experience. Different in that the narrative is nonlinear and highly experimental. From a technical perspective, the film is flawless. The cinematography, sound design, and score all work together to create an immersive experience in which that fourth wall is nearly removed. One of my friends that I saw the film with last night described it as being a fly on the wall within each timeline. With little dialog, the focus is on the various groups of the army, air force, and civilians. The stylistic film reminds me of photo/video journalism. Dunkirk demonstrates that an emotionally satisfying experience can be delivered without conventional storytelling. In many ways Norma Desmond would be proud of Nolan’s film because “[he] didn’t need dialog, [he] had faces.” Dunkirk invites audiences in for a rare glimpse into the reality of war, and the reality of not only the armed forces but the civilian assistance that truly made the difference and just why this particular war story is so remarkable. Be sure to brush up on your knowledge of the events of Dunkirk before watching the film. You’re definitely going to need to have a base of knowledge of the theatre before becoming the proverbial fly on the wall.

Instead of a plot synopsis, here is what Wikipedia has as a summary of the history of Dunkirk Evacuation. This is definitely going to be helpful prior to watching the film.

During the Second World War (1939–1945), in the May 1940 Battle of France, the British Expeditionary Force (BEF) in France aiding the French, was cut off from the rest of the French Army by the German advance. Encircled by the Germans they retreated to the area around the port of Dunkirk. For years, it was assumed that Adolf Hitler ordered the German Army to stop the attack, favouring bombardment by the Luftwaffe. However, according to the Official War Diary of Army Group A, its commander, Generaloberst Gerd von Rundstedt, ordered the halt. Hitler merely validated the order several hours after the fact. This lull in the action gave the British a few days to evacuate by sea and fortify defences. Winston Churchill, the British Prime Minister, ordered any ship or boat available, large or small, to collect the stranded soldiers. 338,226 men (including 123,000 French soldiers) were evacuated – the miracle of Dunkirk, as Churchill called it. It took over 900 vessels to evacuate the Allied forces and although over two-thirds of those rescued embarked via the harbour, almost 100,000 were taken off the beaches. More than 40,000 vehicles as well as massive amounts of other military equipment and supplies were left behind, their value being less than that of trained fighting men. The British evacuation of Dunkirk through the English Channel was codenamed Operation Dynamo. Forty thousand Allied soldiers (some who carried on fighting after the official evacuation) were captured or forced to make their own way home through a variety of routes including via neutral Spain.

If you are approaching Dunkirk from a desire to see a Saving Private Ryan, then you may want to rethink going to see this film. With little convention in the storytelling, this film puts you on the beach, in the air, or on the sea alongside the civilians, pilots, soldiers, and officers. The focus is not on the characters, special effects, or the bloody atrocities of war, but focussed on highlighting a significant event in WWII history that has largely gone unknown except for those in France and the UK. You are very much like a journalist who is capturing the imagery with your camera. It’s a snapshot of war, not necessarily the story of war. War history buffs, this IS a film for you!