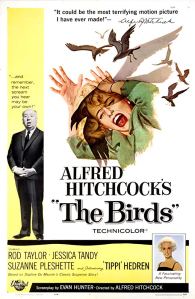 “You’ll never look at birds the same way again” (Jurassic Park). Although Dr. Grant was referring to velociraptors, you can say the very same thing about Alfred Hitchcock’s The Birds. Hitchcock directed more than fifty feature length films, only two of which are horror (Psycho and The Birds). However, he is widely credited, and rightly so, as the director who ushered in the modern horror film, with Psycho being regarded as the first modern horror film. On the heels of the success of Psycho, a film that revolutionized so much about the movie-going experience from movie start times to “not spoiling the ending” (now where have we recently heard that???), Hitch set out to deliver another horror film at the height of his powers. But what would it be about? He turned to past collaborator Daphne du Maurier, author of Rebecca, Hitch’s first American film. Her best-selling novella The Birds had previously been adapted for radio and stage (I’ve actually seen the stage adaptation, and incidentally I prefer the film), but Hitch decided to adapt it (loosely I might add) for the small screen. That’s right, small screen. He originally intended The Birds to be adapted for his wildly popular and successful series Alfred Hitchcock Presents. But like Jordan Peele did with Us, which I am convinced started out as an idea for his Twilight Zone series, Hitch decided to take the idea from TV to the cinema! So with the decision to adapt du Maurier’s novella into a cinematic experience, Hitch made history. Not only is it one of the most famous films in cinematic history, it sowed the birdseed for all the “when nature attacks” movies to follow including Jaws and Jurassic Park. This film was also influential in John Carpenter’s The Fog and Stanley Kubrick’s The Shining. With the question of why did the birds attack never being answered, it leaves the events of this movie lingering in our minds as a possible reality.

To hear a conversation with me on the CineMust podcast chatting about the must-see status of The Birds and Jaws, click HERE.

When wealthy well-known socialite Melanie Daniels (Hedron) finds herself to be the brunt of a practical joke played by lawyer Mitch Brenner (Taylor) at a bird shop while searching for a gift, she decides to return the favor by buying a couple of birds and dropping them off at his apartment. Upon finding that he spends the weekends with his younger sister and mother (Jessica Tandy) north of San Francisco in the small community of Bodega Bay, she drives to the remote town in order to deliver the birds. Soon after her unannounced arrival, the birds of the town begin to act incredibly strangely. Following a seagull attacking Melanie, and Mitch’s mother discovering her neighbor dead from an apparent bird attack, the town realizes that the birds are a real threat. Eventually birds, in the thousands are attacking anyone without reason or explanation as to why this is happening. Trapped in the Brenner household, survival becomes the number one priority for not only our central characters but everyone in the town.

At the heart of The Birds is relationships. Relationships ranging from romantic to familial and then between an outsider and the natives of a close knit town. Paranoia is a common theme in this film as well. The characters and their relationships between one another are so incredibly strong and well–developed that you can ostensibly remove the birds from the equation and the movie still works. Now, it doesn’t work as a horror film, but it works as a drama. The strength of this screenplay, written by Evan Hunter, lies in the complex characters and simple plot. Although the plot is largely changed from du Maurier’s novella, the setting, character dynamics, and the idea of the home invasion are extrapolated from the source material. Outside of the terrifying element of the attacking birds, the film’s subplot is about an outsider invading a close knit community and a de facto love quadrangle between Mitch, his mother, his sister, and his ex. Essentially, Melanie upsets the normal order of the town much in the same way that the birds upset the pecking order of humans vs nature. The screenplay also delivers some outstanding tonal shifts that are seamlessly woven together. Way before the first bird attacks, The Birds begins as a screwball comedy right out of the 1930s, then changes into a soap opera, then suspense, followed by horror. Lastly, the movie takes one final tonal shift from horror to apocalyptic, complete with dead bodies, foreboding birds, and a lack of resolution. This movie has legitimately inspired the real fear of birds (ornithophobia) in how the scenes were shot and the lingering possibility that this could happen in your own town.

There is a brilliant lack of explanation of why the birds are attacking not is there any real means of escape for the townsfolk of Bodega Bay, all while chaos reigns supreme in this otherwise innocent seaside landscape. Yet, this cinematic work is a permanent resident of our sociological zeitgeist. Even those who have not seen the film are aware of its existence. And it has gone from screen to live experience at the former Universal Studios Florida attraction Alfred Hitchcock: the Art of Making Movies. The reason why we don’t focus on the lack of an explanation for the birds bizarre and violent behavior is for the same reason that we don’t ask why Bruce (Jaws) is attacking people. We accept it because the film is more concerned with its theme than points of origin expositional dumps. We don’t care about why the birds are doing what they are doing–that’s part of the horror. It’s the same reason why it’s important that we don’t know too much about Michael Myers; if we knew too much about him, why he ticks, then he would cease to be the boogeyman. These birds would cease to be terrifying if there was some sort of natural or supernatural explanation. The unknown is frightening. There have been many hypotheses over the years as to what the birds represent. The most popular one is rooted in the red scare or communism. And perhaps that is true, but the real villain (character of opposition) is not the birds but the townsfolk of Bodega Bay. The birds are the personification of the mistreatment of and unwelcoming attitudes of the residents toward Melanie. In a similar fashion, the villain of Jaws is the mayor because he is the personification of the folly of man.

When the true oppositional character in a screenplay is an entity, force, or idea, that component has to be personified in a character(s) because film is a visual storytelling medium, so the outdated, nationalistic attitudes of the locals is personified in the birds. Moreover, the ornithologist in the diner stated that if birds of different species flocked together, then all hope would be lost for humanity as we couldn’t stand a chance against them. That foreboding prediction came to pass as both crows and seagulls (who do not mix together in real life) massed together and terrorized the town and its people. As the birds are the original inhabitants of Bodega Bay, the humans represent the outsiders. This symbolism is also witnessed in how the townsfolk banned together to force Melanie out of the town and in how Mitch’s mother urges him to send Melanie back to San Francisco. All through the movie, there are images and sequences of the way outsiders can be marginalized by the majority of the native inhabitants. Human civilization has long sense been guilty of stigmatizing or marginalizing outsiders. At the root of the symptoms of intolerance is fear. So, Hitchcock took that root cause of unwelcoming attitudes and mistreatment and adapted it into a timeless horror film. It holds up so well because fear is still evident in how certain groups of people treat another in our lives today. Hitchcock used a combination of blue screen and practical effect technologies to bring the terror to life. And of those two approaches, it’s mostly practical-effect driven, all the way down to the real birds that were used during the production (with proper bird trainers/wranglers).

Three scenes that I want to highlight are the birthday party, downtown attack scene, and the upstairs room at the showdown. Nowadays, these scenes would be full of CGI and other post-production work. The actors would be acting with no birds on set, or very few anyway. For authenticity, puppets, mechanical, and real birds were used for these scenes to increase the realness and give the actors something to truly be afraid of. In fact, so many real birds were used that there were multiple large bird enclosures on the set that used as the temporary home of the stars of the film. In addition to bird wranglers, the American Humane Society was on set every day to monitor the treatment of the birds. The birthday party scene was composed of rotoscoping birds, blue screen shots of birds, papier-mache birds, and birds that were tied to actors and even more birds that were freely flying within the enclosure built around the set. Although most of the birds remained in the aviary, a few got out. And to this day, there are decedents of those birds living in the rafters of that sound stage on the Universal lot. In much the same way, the students fleeing the schoolhouse and down the hill to the town center–that scene–was accomplished in very much the same way. However, with this one, the added pyrotechnics were incorporated. The iconic phonebooth was covered in birdseed and shrimp to get the birds to go completely crazy. The upstairs bedroom scene at the end of the movie was completely constructed inside a giant aviary with hundreds of birds. In addition to the birdseed and shrimp that was strewn about the room, real birds were thrown at Hedron. The terror in her eyes that you see in the scene is all too real. No amount of acting can replicate that authentic fear. Despite the very real attack of the birds, Hedron is eternally grateful to have been a part of cinematic history.

The single scene that find is the most fascinating and shows the power of Hitchcock’s innate ability to create suspense with a camera is the scene immediately preceding the schoolhouse evacuation–the scene with Melanie sitting on the park bench with the jungle gym int he background.

Finally got around to posting some pics from #Christmas break at home. Had an enjoyable, relaxing break with friends and family. - #ChristmasBreak #HomeForTheHolidays #friends #family #FamilyTime
Thanks Coach @sk8coachroger for my @rockerzskateguards #Christmas present! I’ve wanted a pair for a while now, and was so excited to receive them! - #GetOutAndSkate #TampaBaySkates #FigureSkating @clearwatericearena2019 @sharing_a_journey
Had a great time with @theraulnavedo and @mohamedshama of @mreportpod in Charlotte today! What a great way to start 2020! - #PodernFamily #Friends #FriendTime
Happy New Year everyone! Head over to the #RLTerryReelView (link in bio and below) to checkout my #Top10 #Film lists for 2019 and the Decade! - RLTerryReelView.com - @lone.like @2cool4filmschool @mreportpod @kbrackett @_zzzzach @promotehorror @all.the.horror #cinephile #BestOf2019
Spent the morning decorating cookies with my sister and mom. - #Christmas #Holiday #ChristmasEve #Family #FamilyTime
Some shots from my sister’s show at #ChristmasInHopelands in #AikenSC. She was inspired to create the light show from OFSODL at #Disney’s #HollywoodStudios.