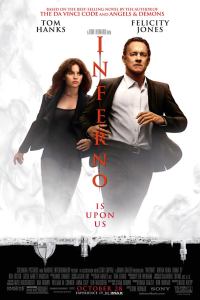 Famed symbologist Robert Langdon is back in a fiery installment in the franchise that bears his name. Sony Pictures and Imagine Entertainment’s Inferno is a non-stop rollercoaster of an adventure film that combines art, history, literature, bio-medical science, and weapons of mass destruction in a heart-pounding thriller that makes academia and public health look sexy. As expected, Tom Hanks delivers an outstanding performance as the Indiana Jones of symbols and puzzles and the visual storytelling is excellent. From the moment the film opens with incoherent subjective flashes through the eyes of Langdon suffering from amnesia, shaky camera movements, and glimpses of disturbing apocalyptic imagery to the final showdown beneath Instanbul’s Hagia Sophia, Inferno will command your attention for the two-hour runtime. Unlike the two previous installments in the Langdon franchise, there is a conspicuous lack of commentary on organized religion by deciphering puzzles and revealing coverups and more of a focus on art history and rhetoric. This focus provides a far more believable plot than found in The Da Vinci Code and lesser so in Angels and Demons. With bio-medical warfare being at the center of this film, the movie paints a realistic portrait of how a Dante-spouting sociopath might try to fix the world’s problems by wiping out half the population with a destructive plague.

Waking up in a state of incoherency and amnesia in an Italian hospital in Florence, Robert Langdon (Hanks) is thrust into running–or hobbling, rather–for his life. Under the guidance and protection of a beautiful ER doctor (Felicity Jones), Langdon barely escapes with his life. Dazed and confused, Langdon must concentrate on piecing together a puzzle–no surprise there–but this time, the puzzle begins with how he got to Italy and why he is carrying a bio-medical tube. From puzzle to mystery, Langdon and Dr. Brooks (Jones) are forced into an adventure that blind-sided them. After discovering a connection between a dead sociopathic billionaire madman and the Italian poet Dante (The Divine Comedy), Langdon and Brooks race across Europe to stop a devastating plague from killing off more than half of the world’s population. Between stopping the plague and constantly under siege by the WHO (World Health Organization) and a private security firm, Langdon is truly racing against the clock to piece together his own life while making the connections in the puzzle left by the deceased sociopath to save the world.

Although in previous installments in the Langdon franchise have the symbologist traversing across Europe and even the world, this film’s plot is mostly concentrated in Florence. Home to some of the most notable works of art in the world, Inferno might work as an unconventional travel guide for the tourism industry in Italy. Far less cerebral than The Da Vinci Code and to a lesser extent Angels and Demons, Inferno is far more visceral, exciting, and thrilling. The lack of religious/historic irony will definitely stick out to those who either read the books and/or watch the movies (I am the latte); however, that does not hinder the film’s delivery of an action-adventure taking place within the worlds of the arts and medical science. With the previous installment Angels and Demons being released in 2009, the high-impact feeling of Inferno is incredibly important because there has been such a long gap between the films. Still, the plot of Inferno does not have the finesse that both previous films have. Although this installment is incredibly enjoyable and entertaining, it lacks the opportunity to question, think, and analyze the mystery at hand.

Another contrast between this present installment and the previous two is the character-heavy plot. Occasionally, the film felt overrun with characters. Albeit, most of the characters are interesting and also possess brilliant minds, at times the plot is overcrowded. Perhaps that was intentional since the billionaire madman claims that the population should be reduced because of overcrowding the earth; however, it’s more likely that writer David Koepp and director Ron Howard were attempting to get as much of the novel on screen as possible. Not having read the novel, I am unable to comment on the translation from page to screen beyond inference. Despite the character-heavy plot, the film is not without the trademark art, history, literature, and enigmas that are synonymous with the Langdon series of books/films. Beginning with a reimagined map of Hell based on the one described by Dante in The Divine Comedy and illustrated by Botticelli, the film’s plot does come back to the puzzles but most of the time is spent being chased by nearly everyone.

The best part about this film is just how exciting it is. If you are even remotely interested in it, you won’t be disappointed. As this is a franchise, and franchises tend to have intentional or unintentional patterns of behavior within the cast of characters or similarly functioning plot devices, there are definitely elements in this installment that are found in the previous two. There is one plot twist that bares a striking resemblance to one in The Da Vinci Code. The non-stop action will likely kindle an interest in pursuing a career as an academic or official with the WHO. Perhaps, the study of symbols, numbers, and taxonomy, will be of greater interest to current students. There are just enough loose ends and unanswered questions that keep the film from being too predictable.

Looking for an exciting cinematic adventure for the weekend? That is, when you are not either at or recovering from a Halloween party. Check out Inferno! Not Halloween-themed at all, but it is a fun adventure full of excitement and you’ll learn a thing or two about art, history, and literature.