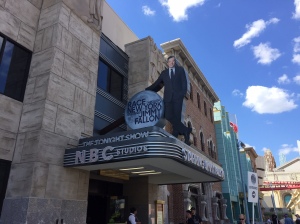 A cute, fun ride, but ultimately a generic experience. The anticipated new Universal Studios Florida attraction Race Through New York Starring Jimmy Fallon began soft openings this past weekend. If you are unfamiliar with that term, a soft opening is when the attraction is essentially in tech rehearsal operations, meaning that it can start, stop, or turn off certain components at any time. With the successful run of Universal Team Member (staff) previews during the latter part of last week, the attraction went directly into public soft openings. When an attraction goes directly from staff previews to public soft openings, that is usually a good indicator that the ride is in prime operating condition. From the time I entered the queue to the time I exited through the gift shop, it was a flawless experience! Everything from the innovative virtual queue to the ride operation went off without a hitch. Due to the park being in the middle of Mardi Gras and the news of a soft opening of a new attraction, this combination certainly brought in the crowds. With a wait time of a little less than 60mins, it was all-in-all a pleasant experience during the ride’s preview. But, I wouldn’t wait more than 30-45mins for this attraction in the future.

Outstanding queue! Ever since Islands of Adventure opened in 1998 and increasingly so since the Wizarding World of Harry Potter opened in 2010 at Universal Orlando, there has been a demonstrable trend in elaborate queue designs and experiences. Not only are ride designers focussed on the ride itself, but now are nearly equally focussed on creative an immersive experience in the queue. Evidence of this can be found in many of the attractions at Universal, Disney, and Busch Gardens that have opened in the last few years. But I digress. Without question, my favorite part about this new attraction is the queue design and experience. Although I have not been to the Rainbow Room, NBC Studios, or 30 Rock (aside from taking the express elevator to the observation decks), I felt like I had just walked off the streets of New York City and into the studio complex to be part of The Tonight Show‘s live audience. Much like a museum, there are exhibits featuring television production equipment over the decades as well as the evolution of NBC’s iconic peacock logo. Clearly the central figure of the attraction is the current host of The Tonight Show Jimmy Fallon, but there are also exhibits that dedicate a showcase to each of the hosts as well as a mural of all of the hosts together. I spent several minutes just walking around the–what amounts to a–museum.

The reason for the ability to casually stroll through the sequence of showcases: a virtual queue. When you enter the attraction, you are given a colored ticket. Each of the colors for the tickets are taken from the six colors of the NBC peacock. The queue is composed of an entry hallway, NBC/The Tonight Show historic exhibits and showcases, and preshow room. Light fixtures and ambient light, in the various rooms, correspond to the colored tickets that determine what group goes next. When the light changes to the color ticket you hold, then you may proceed to the next waiting area. Making it easy to know where your group is in queue, the order of the colors called are the order of colors on the peacock’s tail. The entry hallway features the evolution of the NBC logo from it’s earliest days to the present. A similar exhibit can be found at the NBC Sports Grill and Brew at CityWalk. Making your way from the entry hallway to the first large waiting space, the next room features tributes to The Tonight Show‘s hosts over the years all around the room in addition to some television production technology over the years. With so much to look at, the time really flies by! This is the first room in which you wait for your color to be called; from this room, you walk upstairs to the next waiting area that truly has the guests in mind in terms of creating a pleasant waiting experience.

As much as I enjoy a museum-like experience in a queue, the next room is definitely my favorite! Enjoy Ragtime Gals and Hashtag the Panda? Then, you’ll be delighted to know that you get to be entertained by them in the final room before entering the studios for your exclusive taping of The Tonight Show. In addition to the live entertaining–which I’ll get to in a moment–there are several sofa-like chairs along the wall with ample USB ports for charging your personal electronic devices. Definitely a convenience if you’re like me and are catching Pokemon, listening to music, texting, and taking pictures while at the park. IMPORTANT: bring your own sync cable! If you are carrying a portable charger, then you already have your sync cable; but if you just have your phone, remember to bring your USB charging cable with you into the queue. In the area of the charging chairs, there are large flat panel displays that offer a variety of games to pass the time. Even with all the people in the waiting area, if I wanted to play the games, it wouldn’t have taken long for one to open up. This is partly due to the various offerings in the room as well as every 10mins or so (on that day), one of the colors would be called. The most entertaining element in this final room before getting on the ride is the Ragtime Gals! Their combination of traditional Atlantic City a’cappella mixed with covers of pop songs and a little lip sync battle thrown in makes them a show not to be missed! The sheer stamina alone was impressive. There had to have only been a few minutes between each set and the cast did not change (as long as I was in there). Furthermore, the repertoire was vast, considering that I never heard a repeat for the 30mins or so that I was in there. After the sets, Hashtag the Panda came out dancing and entertaining the audience. Honestly, this is probably the best queue experience I’ve ever had.

Up to this point, you may be wondering why my opening line included “but ultimately a generic experience” because everything up to this point makes for an exceptional attraction experience! That’s because the ride itself leaves a lukewarm “meh” in your mind. In terms of the race, the studio audience is pitted against Fallon in a race through New York and ultimately to the moon and back. Along the journey, you get to listen to the house band Roots, run into some familiar characters from Fallon’s show, and get to see some of the most visited sites in New York. Much like a video game race, there are checkpoints along the way and plenty of laughs to accompany your zany race through The Big Apple. Rumor had it that the attraction platform would be similar to Epcot’s Soarin’ Over the World (formerly Soarin’ Over California), but that is unfortunately not the case–at least, for the most part. If I were to compare this new attraction to a similar experience at Universal Studios, it would be closest to Despicable Me: Minion Mayhem and at Disney, closest to Star Tours: the Adventure Continues. There are some shared elements with Soarin’ but very few. Essentially, it’s a glorified 3D moving theatre with some water effects to add that 4th dimension to the experience. And that’s just it. What Universal Studios did not need was another 3D theatre attraction; granted, the technology is impressive and the movement of the bleacher style seating is impeccably timed with the movement on the screen. The attraction has some length to it, and it is mildly entertaining; but it simply fails to leave a lasting impact on the park guests. Like I said earlier, the queue is the best part!

What’s missing is more physical movement. With the massive integration of 3D immersive technologies into attractions at most major theme parks, the line between movie and ride is becoming blurred. And that’s not a good thing. Yes, feeling like you are IN the movie instead of learning about the magic of filmmaking (considering there is little magic left in the process) has been the trend for the last decade or so; but, when the experience on the ride feels like just a step above watching a movie, therein lies the problem. The MainStreetMouse on Twitter posted an article recently about how technology is ruining Disney rides, and I think there is a lot to be explored along those lines. Seems like with prolific amounts of mapped projection, elaborate 3D technologies, and synced movement, the unique experience of a “ride” is becoming lost. Physical movement is sacrificed for visual simulation. Not that every ride in a theme park has to be some version of a coaster or dark ride–not the case at all–but when the experience bares little significant difference to watching a movie, the magic of the theme park experience begins to mitigate. Had Race Through New York Starring Jimmy Fallon been closer to Soarin‘ then I would have enjoyed it immensely more, or if it had been closer to Harry Potter and the Forbidden Journey then the experience would have been memorable, impactful. Since the entire ride experience consists of a moving 3D theatre, it just lacks qualities that make it truly memorable. Theme parks need to lay off the massive integration of 3D and spend more time on how to integrate significant physical movement into future attractions.