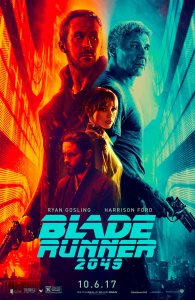 Just as mesmerizing as the original! Denis Villeneuve’s Blade Runner 2049 is nothing short of a future classic that demonstrably possesses the soul of the original and pairs it with a new plot brought to life by a fantastic cast. Every minute is filled with beautiful cinematography that is perfect in every way and a haunting score that penetrates down to the bone. At its core, Blade Runner 2049 wrestles with this one central question: what does it mean to be human? A question that can spawn hours of debates or an exquisite nearly three-hour motion picture. Considering that Ridley Scott has not delivered the same quality for which he provided precise and poignant direction, it was a solid decision to attach Villeneuve as the director. This sequel 35 years in the making may not have had the classic Ridley Scott at the helm, but Villeneuve channels his inner Scott to provide audiences with the same profound cinematic experience today as Scott did when Blade Runner first released. From the color palette to the lighting to the sound design, this motion picture is one that typifies the power of the art of motion pictures and one that will surely be regarded as iconic as the years more along, very much in the same way that the original has been regarded over time.

Officer K (Ryan Gosling) is tracking down the remaining legacy Replicant models created by the infamous Tyrell Corporation, and his latest mission takes him to an obscure farm in the middle of dessert California. After retiring the replicant at the farm, K uncovers what will become a metaphor for Pandora’s Box, as it opens a mystery that law enforcement and the Wallace Corp. seek to solve. The secret contained within the box is one that could potentially plunge all “humanity” into complete chaos, not there there isn’t enough of that already for those left on earth. K’s journey takes him from the gritty, grimy streets of Greater Los Angeles to the dust bowl that was once Fabulous Las Vegas. There, he meets former Blade Runner Deckard  (Harrison Ford) who has been hiding from law enforcement and the Wallace Corporation for three decades. Together, they must work to locate the miracle that no one ever could have thought would happen–or could happen.

Despite not pulling the numbers that Blade Runner 2049 was forecasted to bring in over its October opening weekend, the film did what fans wanted–it kept the very essence of the original movie alive and well. For all the artificial intelligence in the film, there is nothing artificial about this long-awaited and highly anticipated sequel to the Ridley Scott classic. The reason for not pulling the numbers that it was predicted to do can likely be attributed to the tone of the film and the stylistic filmmaking approach that borders on neo-noir meets the avant-garde. Although not completely necessary, it is incredibly helpful to have seen the first film. And seeing the first film gives an appreciation for the sequel that cannot be experiences without having knowledge of the first. The slow-pace and dark atmosphere may be some of the reasons why more people did not wish out to see it as the weekend moved along. Looking at the two films side by side, this film is a direct extension of the original so the authenticity of this universe and story is genuine and almost visceral. For those who prefer more dialog or higher concept plots, the film may not strike the same level of enthusiasm because of the heavy visuals and dark themes in addition to the profound questions. This combination is not one that will attract the general populous in doves; however, this film IS what it needed to be. Sometimes a long-awaited sequel has to be made to remain true to its soul because that is what the fans want to see, and it’s the true fans who continue to visit the cinema year after year. Blade Runner 2049 may not win over new fans, but it keeps the diehard ones happy.

At the heart of Villeneuve’s cinematic masterpiece are existential questions that drive the plot forward. A plot driven by such questions told through a sedated pace is one that is not as easy to digest as one that is more superficial and more rapidly paced. Still, these questions are profound and cause one to think hard about what it means to be human. What sets this film apart from other science-fiction rapid fire blockbusters is the commitment to visual storytelling and the art of creating a motion picture. Blade Runner 2049 mirrors its predecessor and remains true to the experience of the first. Cinephiles will especially appreciate this film for it harkens back to a time when German expressionism was at the foundation of the set design and lighting. There are many exaggerated and elongated shapes that exist in a world of harsh shadows and dimly lit alleys throughout the film. Although the look of the future world in the original was one that audiences may not have believed would come true or could come true is seen differently by today’s audience that can easily see just how accurate the world of the Blade Runner movies actually is–the mediation of society today seems to be not that far off from this not-so-distant future.

Cinematographer Roger Deakins captures a wold through the lens that seems to go on forever in a world of greys and beiges. The only color to be found is in the prolific advertising on the sides of buildings. Deakins further extends the artistic approach to the cinematography by paying homage to Stanley Kubrick’s The Shining in a shot that was actually added to one of the more recent recuts of Scott’s Blade Runner. That score, though. The sound design and score are an audible extension of the visual landscape. Composers Benjamin Wallfisch and Hans Zimmer have created one of the most haunting scores to ever be heard in the cinema. The combination of ghostly groans and blood curdling howls echo the very look and feel of the landscape. I’ve rarely encountered such an immersive sound design and score in a film. Just as the world on screen is an uneasy place to live and one that contains faint images of the grandeur of a world that once was, the score accompanying this motion picture places you in the midst of this post-apocaltyic world that most natural-born humans have left.

Definitely a film that I want to watch for a second time in order to appreciate this film, boasting with artistic achievement, even more than I already do. Although most of the themes and subtext are centered in and around “what it means to be human,” there is a real message regarding the importance of bees. An important visual statement in the film because the populations of bees, the most prolific pollinators, are dwindling. Not for the casual movie-goer, this film is for those who want to experience a sequel in the vein of the original that shows the artistic side of the creation of motion pictures.