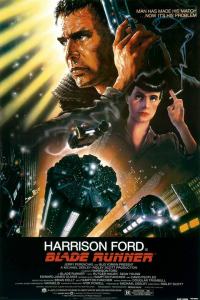 Still a visionary masterpiece? On the rare occasion that I do not feel compelled to see one of the weekly new releases, I enjoy taking my Thursday night and watching an older movie that would be fun to review. As it turns out, it dawned on me that I had never seen Ridley Scott’s Neo-Noir Blade Runner despite the fact that it it a critically acclaimed film and highly regarded by many of my contemporaries. I have found that sometimes you have seen clips, heard people reference it, and simply hear the title so much that you think you have seen it. Then you realize that you’re familiar with the ideas, concept, or story but not the movie itself. So, I decided to watch it for Throwback Thursday and review it today. Unfortunately, I have been struggling with connecting with the film as so many other filmmakers and film lovers have. When watching a movie from 30+ years ago, I do my best to place myself in the shoes of the audience then. But, I am having difficulty this time. As a peer-reviewed cinema researcher, I believe that no matter how old a film is that it should still be relevant and impact audiences many decades down the road. Truthfully, I am not entirely seeing why it is such a regarded film still to this day. However, it is definitely an artistic masterpiece due to the technical elements of the production. So in many ways, yes, it still IS an iconic visionary masterpiece; but, fails to connect or resonate with audiences today.

Travel to a dystopian Los Angeles in the year 2020, or present day Detroit; take your pick. Many have fled the city for colonies on other planets or to the far north of the city to escape the rampant chaos. In the early to mid 2010s, Tyrell Corporation invented Replicants (or human-like androids) to carry out menial tasks and hard labor in a modern slavery fashion. Each unit was programmed to last for a specific amount of time (4yrs +/-). When a small band of Replicants decided that they wanted to take their lives into their own hands, they return to earth from the planet they were slaving way on and are determined to force Tyrell Corp to fix them. These Replicants led by Roy (Rutger Hauer) will stop at nothing. Over the years, when the Replicants began to pose a threat to humanity, special operations forces known as Blade Runners were trained to “retire” the androids. Former Blade Runner Rick Deckard (Harrison Ford) has been reactivated and forced to retire the small band of Replicants that pose a threat in the already dystopian Los Angeles. Follow Deckard as he conducts an investigation and is fearful of his own life as he attempts to track down and “retire” the remaining Replicants before they achieve long-lasting life. All seems pretty routine until he encounters a special Replicant named Rachael (Sean Young) at Tyrell Corp.

It doesn’t take long to understand that this film is a neo-noir detective movie that takes place in a dystopian future. Neo-noir is regarded as a film noir style movie produced after the classic film noir period (which was relatively short (~1940s-50s). This genre [although, technically, there is sufficient evidence to suggest that film noir is more of a style not a true genre] follows many of the same tropes and elements found in film noir (think Billy Wilder’s Sunset Blvd, Double Indemnity, classic detective movies, or Orson Welles). Often, the protagonist is a solitary individual who finds him or herself in over his or her head who faces or exhibits perpetual pessimism, fatality, or menace in a plot consisting of cynical attitudes and sexual motivations. From a technical perspective, film noir (or neo-noir) is stylistically dark, high contrast, low key lighting, contains strategic shadows, and shots filled with symbolism and dichotomy. The plots are usually slow burning and contain social commentary or a self-reflexive narrative. Once analyzing this movie as a neo-noir, it becomes more fascinating but still lacks that timelessness that can be found in some of the examples mentioned earlier in this paragraph. As a artistic film, I am impressed with the vision of Ridley Scott. As a classically-regarded and praised film, I am not very impressed. Although, I find that it is an excellent example of how many in the early 1980s viewed the future and that is is a fantastic example of neo-noir style filmmaking.

One of the biggest problems I had with the film is the fact that I had trouble loving the protagonist or hating the antagonist, or feeling sympathy for either of the aforementioned. In screenwriting, it is imperative that the audience make a firm connection with either the protagonist or the antagonist. Note: the antagonist in a film/neo-noir is not always the “bad guy.” Whereas even Gloria Swanson’s Norma Desmond in Sunset Blvd made a strong connection with the audience in that we feel great sympathy for her plight, yet she is the antagonist in the story–or many agree as such. Harrison Ford’s Deckard in Blade Runner never quite garnered strong support from me in the same way his nemesis Roy failed to elicit disdain. Both Deckard and Roy are fairly static characters–meaning they lack dynamic development. There is, however, an indirect glimmer of character development in Roy at the very end that plays significantly into the plot for a brief but strategic moment. As regularly reoccurring throughout the narrative the character of Rachael is, she can almost be removed from the film and change little in the overarching story. For the most part, she simply exists and pays into Deckard’s motivation, but mildly so. She neither causes him to view Replicants differently or becomes his sole goal. It is clear from early on in the plot that Deckard already had reservations in retiring Replicants. Rachael simply amplifies or intensifies the feelings that were already brewing.

Looking back at movies from the mid to late 20th century that take place in the early to mid 21st century can be quite entertaining. Sometimes the future portrayed in the film, in one form or another, has actually come to pass. Although, other times, the future is incredibly inaccurate. The dystopian Los Angeles in Blade Runner is definitely the latter. Yes, there are themes of unchecked immigration, authoritarian power, and capitalism that can be read as not so different from today; but, for all intents and purposes, the future is much more grim in the movie than in today’s reality. Perhaps that’s why it can be difficult to connect with this movie. It takes place in a “future” that never happened, and probably won’t happen in the now near future. I think that’s the danger when writing or directing a movie set in a future that relies heavily upon technology directly related to the plot. Some movies can pull it off. Take Back to the Future for instance. It works because the technology in the culture of the future isn’t significantly integrated into the essence of the plot or are solely responsible for some dystopian world. The futuristic technology merely exists and helps to move the plot along. In Blade Runner, the whole reason for the plot is because futuristic technology in our present day has turned on its creators and became the catalyst for a world drowning in chaos.

If you have never seen Ridley Scott’s Blade Runner, I definitely encourage you to do so, especially if you enjoy film or neo-noir movies. It provides us with a glimpse into how the world viewed a possible future in the early 1980s; and prompts us to think about life and how we might behave if we knew that we only had a few years to live. Survival of the fittest maybe? Or, fight or flight? If I was a psychologist, I think that this would be fascinating to analyze from a psycho-social perspective. At the end of the day, the film was quite the visionary masterpiece for its day and still remains a favorite of many filmmakers, scholars, and just film lovers alike.

*This review is in reference to the original theatrical release