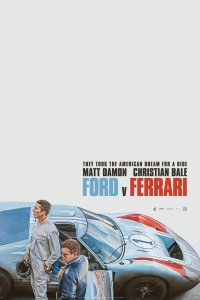 Exhilarating! Ford v Ferrari is a high impact cinematic experience that you will want to see on the biggest screen possible. On the surface, this may look like a movie about motorsports; but thanks to James Mangold’s excellent screenplay and meticulous direction, the central conflict transcends the nuts, bolts, and motor oil to deliver this very human “David and Goliath” story. The captivating story of the American motor giant Ford taking on a name synonymous with speed Ferrari will take you for the ride of the holiday season through the outstanding technical achievement of this motion picture. And the accolades don’t stop there, prepare yourselves for fantastic performances from Matt Damon and Christian Bale as Carroll Shelby and Ken Miles respectively, not to mention the solid supporting role of Henry Ford II played by Tracy Letts. While I am not a car guy, there was still something special about the experience of watching the world’s most prestigious automobile endurance race, the 24hrs of Le Mans on the big screen. Maybe there is something patriotic about this underdog story, because it’s the US vs Italy? And in that patriotism, audiences have a unified enthusiasm to see the US beat the iconic Italian luxury automobile company. At the core of this movie is the powerful engine of the kindred-spirit friendship between Shelby and Miles. Furthermore, this film seeks to comment on the relationship between artists and their work, and the backers (or in this case, corporations) that commission the art. One might say that the car race in this film parallels that of the Oscar race that happens throughout the year, but mostly in the last quarter. Shelby and Miles are artists in every sense of the word, but even they must depend upon capitalism to fund their work and lives. While the race between the mass assembly plant versus the handcrafted studio supports the main action plot, it’s the character-driven story of artists versus the bureaucrats that give this story the power under the hood.

American automotive designer Carroll Shelby and fearless British race car driver Ken Miles battle corporate interference, the laws of physics and their own personal demons to build a revolutionary vehicle for the Ford Motor Co. Together, they plan to compete against the race cars of Enzo Ferrari at the 24 Hours of Le Mans in France in 1966. (IMDb)

Where this film may see nominations is in the technical achievement categories. The cinematography, editing, and sound design are running at 10000RPMs! The camera does more than take you where so few have gone before, but it places you in the drivers seat in such a way that you will feel completely transported to the runways and raceways of this film. Even more impressive than the cinematography is the sound design that equally audibly moves you to the various locations of the film. You hear everything in such clarity that you will forget that you are sitting in the auditorium. And it all comes together in the magnificent editing process. Whereas the editing is not particularly stylistic (much like with the cinematography), it is absolutely stunning in every measurable way. This is the kind of film that can fall apart during editing. The editing never sticks out like “here, don’t you like this editing.” It remains in the background, yet holds every element together so that the story is consistently the focus. General audiences won’t notice the editing per se, and that is the best kind.

For artists out there, you will love the parallel between the racing life on screen and the artist’s life. Much in the same way that Shelby was commissioned by Henry Ford to build a stronger, better, faster, more nimble GT40, artists are commissioned every day to create something for audiences, the public, or private collectors. As much as artists love their art and possess an integrity that is poured into their respective art form, and seldom like to answer to anyone when they are in the zone, even then an artist has to answer to those whom are funding the work. And therein lies a great conflict. When the artist knows what will work and what is best, but the one with the purse strings is more concerned with turning a profit or pleasing the bottom line than the integrity of the art itself.

We witness this over and over in Ford v Ferrari (aka Ford v Shelby) the Ford Motor Company telling Shelby what will work best, when he is the expert in designing and building race cars. Although, Miles is even more of an expert than Shelby is. And that brings up another conflict between approaches to a project and solution. Just as much as the film is Ford vs Shelby, the film is more about Shelby vs Miles. If Ford vs Shelby is the Corporation vs The Artist, then Shelby vs Miles is the mainstream Artist versus the indie Artist. Both Miles and Shelby love cars. However, they each have wildly different temperaments and people strategies. Miles is the unapologetic artist whom refuses to compromise on anything, would rather not accept much-needed money than feel trapped as a designer. Shelby is the mainstream artist whom has an individual vision, but tends to bend to the will of Big Business in order to keep his business running. He a compromiser. Three distinctly different irons in this fire.

By the end of the film, Henry Ford is a static character, having learned nothing through this process except for one brief moment in which he made a decision against his initial thoughts. However, on the other hand, both Shelby and Miles demonstrate great growth in the film. Shelby reconnects with his uncompromising roots that initially got him to where he was, he rediscovered the love and passion for race card that made him the world champ that he was. Miles learns that sometimes that you need to be a team player in order to achieve the greater success. It’s these characters that make this a movie that you need to see. It’s the human story behind the wheel, not what happens on the race track. That being said, going into this film you may not know or ever cares who won the 1966 24 Hours of Le Mans, but for two and a half hours you will care so deeply that the unlikely victory in this film may even bring a tear to your eyes.