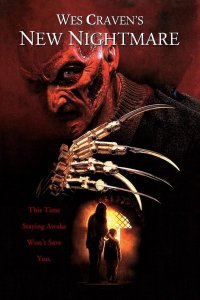 Before “meta horror” became commonplace, to the point that the once innovative concept has become all too cliche, Wes Craven wrote and directed his triumphant return to the Nightmare on Elm Street franchise (although, he did co-write Dream Warriors). Made, not only for horror fans but also for general horror audiences, New Nightmare is a horror film within a horror film that successfully dances the line between reality and fantasy. One can easily liken that to the very character of Freddy Krueger who exists in our dreams but can inflect real pain. A fascinating parallel! Craven’s revolutionary approach to one of the most iconic franchises in horror history begs the question asked of horror filmmakers whether the effects of the diegesis on screen cross over into the real world, affecting the actions and thoughts of people who love to watch horror films. Beyond the meta nature of the plot of New Nightmare, there is also a self-reflexive element to the plot because the story, lore, and movies of Freddy loops back on itself by confronting the creators of A Nightmare on Elm Street. Wes, Robert “Bob” Shaye, Robert Englund, Heather Langenkamp, and even future horror star Lin Shaye (Robert Shaye’s sister) are all playing themselves, and even referencing the Nightmare movies in the same way we do. Heather even references all the movies in the franchise, not just the one’s she’s in.

While other franchises force a reboot or revival in order to bring back an iconic horror icon–by way of just chalking the return up to being a superhuman, resurrected, or supernatural with little to no reasoning–New Nightmare provides evidence (albeit supernatural) for why more Freddy films need to be made. Therefore, Freddy will appear in one more movie (two more, if you count this one). One more, because we do not count the 2010 remake (it does not exist). While few will dispute that the original A Nightmare on Elm Street is the best, it is quite possible that this self-reflexive entry is the second best. During graduate school, when studying horror films, I used Carol Clover’s pleasurable unpleasure and Freud’s uncanny often when exploring the subtext and themes of horror. Both of these theoretical approaches to reading and understanding horror films are clearly visible in this brilliant story. We get pleasure out of and attracted to that which should repulse us. Therefore, we do not want Freddy to be dead. In many ways, we need Freddy to live, and New Nightmare brings Freddy back for an encore in the present story and Freddy vs Jason. Of course, we’ve had the first appearance of Robert Englund as Freddy in last year’s Halloween episode of The Goldbergs and there is massive social media support for Englund to play Freddy one last time.

It had been ten years since Freddy made his debut in cinemas worldwide! The once near-bankrupt New Line Cinema rose up from the ashes to become a powerhouse of films and distribution. While the first three Nightmare on Elm Street movies are solidly horror, the franchise took a different route than Halloween or Friday the 13th by relying upon comedy to the point that the franchise became a parody of itself. The worst offender being Freddy’s Dead. We watch them because we love Englund as the iconic horror villain, but the movie’s plot and other characters were complete garbage. Fun garbage, but garbage nevertheless. With the downward trajectory of the franchise heading to “direct to TV or DVD” territory, why make another Freddy movie? Simply stated, Bob Shaye said “because the public wants it.” This line is from a Shaye cameo in New Nightmare, referencing the Nightmare movie that is being produced within the film we are watching, but is also very much why New Nightmare was made. Although I have no empirical data to back up this statement, I imagine that Freddy has more fans than Jason or Michael. From his self-deprecating humor, memorable one-liners, and creative kills (despite a low body count), he has found his way into our cinemas, homes, and dreams.

New Nightmare represents a return to true horror for the franchise. Not that Freddy doesn’t have some funny lines, but the focus of the film is on the horror of Freddy manifesting in the real world. Under the direction and writing of the brilliant Wes Craven, the Nightmare franchise was about to get a heaping helping of genuine horror infused back into the series. The strength of this movie is in the script and direction that was about to take horror to new frontiers by pioneering the largely untapped sub-genre of meta-horror. Whereas Craven’s Scream is the definitive meta-horror, he used New Nightmare as the training ground. Therefore, we can consider New Nightmare as the proto-meta-horror film. Upon a close reading of New Nightmare, the groundwork can be witnessed that would support what would become Scream. In addition to exploring a new sub-genre, this film delivers the horrifying, murderous, Freddy that we were first introduced to in 1984 instead of the sinister clown that he became in Freddy’s Dead. Once again, he becomes the centerpiece, only this time his claws are sharper and he’s been given a more sinister makeover. None of this could come together if Englund wasn’t reprising his iconic role. But instead of more blood, Freddy and Craven deliver quality scares, kills, and drama versus shallow kill after kill gore fests.

The central question in this film is: where does the line between fantasy and reality lie? Moreover, is it a dark, bold line or it is one that is blurred or delineated? The first movie was inspired by the series of real articles in the Los Angeles Times that chronicled people who claimed to have been nearly scared to death in their nightmares, but then they actually died. This film takes the idea of a dream-like killer to the next level by using the past Freddy movies as a springboard, as a source of energy for the idea of Freddy to cross over into our reality. What’s crazy is that we have witnessed this IN real life. Here’s a great example: in Se7en, the film never actually shows Gwyneth Paltrow’s head in the famous box; however, countless people report to have seen her head in the box. It is an idea that is so largely collectively shared that it becomes part of our reality. So, Craven is taking that same idea and applying it to A Nightmare on Elm Street. The fascination I have with this particular installment in the franchise is just how brilliantly Craven dances that line between fantasy and reality; he does it in such a way that it comments on our fascination with horror movies. Much like Craven’s line I referenced earlier is both about the movie within the movie and about us (the audience), Heather Langenkamp questions “don’t you people ever think about the effect your movies have on the people who watch them? A question for (1) Craven and (2) Shaye in the film and (3) by extension, a question to us (the audience). Deep, right?

The concept of Freddy crossing over from the screen to our world is a fascinating approach to take in this film that laid the groundwork for Craven to forever change the landscape of the American horror film just two years later in Scream. Craven’s masterful grasp of horror storytelling is highlighted in his speeches within the film. Furthermore, his years as a humanities professor certainly provided a critical lens through which he analyzed what makes horror special. There are few other writers/directors who understand the genre as well as Craven did. I absolutely love the idea Craven posits in the film that when a horror story dies that an evil force is released upon the world because it needs to live somewhere. And if not in its story, in our world. A terrifying prospect. Furthermore, once can extrapolate from Craven’s monologues in the film that we need horror films to contain as much of the evil in the world as possible. These films keep nightmares from consuming us in real life. He urges us to keep these stories alive because they are how we work through so many of life’s perils, traumas, and conflicts that tap into our most primal fears.