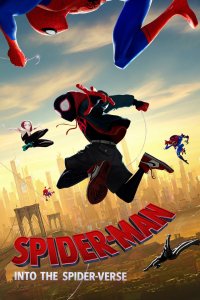 Now THIS is the amazing Spiderman! Eat your heart out Tom Holland and move over Incredibles and Ralph for the best animated feature of 2018. Even if you do not care for comic book or superhero movies, by in large, but love excellent motion pictures (animated or live-action), then I can almost guarantee that you will thoroughly enjoy and greatly appreciate Sony’s Spider-Man: Into the Spider-Verse. Although there have been a handful of animated films that I have liked in recent years, I have not felt emotionally and physiologically engaged with an animated feature to this degree since Kubo and the Two Strings. What both these animated features have in common is groundbreaking artistic precision that typifies the art of animated visual storytelling. Not only does Spider-Verse blow all other animated films out of the water this year, in terms of its contribution to the art and science of motion pictures, I put it on par with Kubo. The attention to production design details and mindblowing editing set the bar incredibly high for animated features moving forward. While the visuals have been likened to an acid trip, do not allow that to dissuade you because never once did I find the avant-garde artistic expression dizzying or obnoxious. It was completely immersive. There was genuine, tangible emotion felt in every frame. And the Stan Lee cameo was priceless. Underscoring everything on screen is the phenomenal screenplay upon which this mesmerizing animated feature is built. Undoubtedly, you will find yourself emotionally invested in the central character of Miles and the chief supporting cast, including the fantastic villain King Pin. There is so many layers to this story, and it works on several levels such as: family, love, self-sacrifice, and more. Highly recommend this film!

1 thought on ““Spider-Man: Into the Spider-Verse” brief film review”