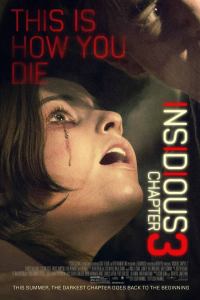 Ridiculous: Chapter 3. The final chapter in the Insidious trilogy takes us all the way back to the beginning. Only, you will find that the beginning is far less terrifying and interesting than the previous films in this story. The one saving grace the film has is the pretty interesting backstory to Elise (Lin Shaye) and her small team of paranormal hunters. We also get a couple references to the Josh Lambert case from the previous movies, and we learn a little more about the bride dressed in black that brought Elise to the Lamberts in the first place. Compared to the the original and, to a lesser extent, the sequel, the third movie is much less developed diegetically (narratively) and contains poor dialog. I have a feeling most of the fans of the series will be disappointed by this installment. It is very apparent that James Wan did not have much to do with the final chapter in the series he created. For what it’s worth, the movie does have its moments of terror and cliche jump scares. As with many horror films, it’s still a fun one to watch with friends or on a date…most likely you’ll be able to put your arm around your movie date. So, there’s the silver lining.

Insidious Chapter 3 is the final movie in the Insidious trilogy. Follow Elise (Shaye) all the way back the beginning to a case involving a young lady named Quinn (Stafanie Scott) who recently lost her mother. Upon trying to contact her mother, Quinn feels she may have awaken something far more insidious (yeah, I went there, haha). Arriving without notice on the doorstep of Elise’s house, Quinn seeks her assistant in contacting her mother. Unlike the Elise from the previous movies, this one is scared to step back into the supernatural world and tells Quinn she cannot help her to the extent Quinn wants. Following continued terrifying events and malevolent appearances of evil entities, Quinn’s father (Dermont Mulroney) reluctantly contacts web-famous paranormal hunters (Leigh Whannell and Angus Sampson). Realizing that the entity that haunts Quinn is way beyond their expertise, all seems lost. But, Elise confidently arrives to save the day. Now, Elise must go into the further to conquer the evil that so desperately wants to claim the life of Quinn; but not only will she face the demon that wants Quinn, Elise must also confront her fears as well.

While my hopes for this film weren’t terribly high, I was definitely hoping for something better than what I saw. Although the sequel to Insidious was strong for a horror sequel, neither the second nor–definitely–the third are on par with the original. I know, I know, that is not uncommon in the horror genre, but there was such an opportunity to truly develop the events leading up to the Lambert case from parts 1 and 2. Now, we do get some character and subplot development in regards to the character of Elise, but that’s about it. The paranormal case of Quinn is not nearly as terrifying as the Lambert case and is not nearly as well executed. Often writing suffers in cliche horror films–such as this one–but the writing for most of the dialog was so incredibly poor that is was nearly laughable. Once the movie was over, it was as if everyone in the audience asked themselves “is that it?” And–spoiler alert–we get an almost comedic glimpse of the “Darth Maul” demon from the first movie.

Some of the few positive notes regarding the movie is the fact we do get to learn more about Elise’s character and her ragtag team of paranormal hunters. So, that was pretty cool and somewhat interesting. Although not directly explained, there is evidence to suggest why the bride dressed in black hates Elise so much, and kills her in the first movie. Unlike the first two movies, there is very little emotional investment or attachment to any of the characters with the exception of Elsie. Even in the first movie, her character is often considered the favorite in the films. That is most likely do to her good looks–for an older actress, confidence, compassion, and courage. And, in this movie, she has a great single line that prompts everyone to clap and cheer. You’ll just have to watch it to find out. Despite the terrifying nature of the movie, there are come minor comedic relief parts–ones that were intentional.

For me, the best part of watching this movie was the sneak peek into Jurassic World during the previews. So, if you are a fan of the Jurassic Park series, you may want to see Insidious 3 just for the exclusive look into next week’s box office smash hit! For fans of horror movies, you will probably enjoy this film even though it simply did not live up to the low bar of expectations.