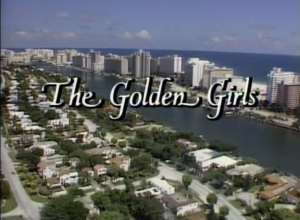 Thank you for bein’ a friend! Those now iconic lyrics opened Touchstone Television’s (Walt Disney Company) show on NBC for 180 episodes over 7 successful seasons. Earning multiple awards from Emmys to Golden Globes, this series is also one of only three sitcoms in which each principle actor received an individual Emmy. The Golden Girls was ranked in the top ten shows for six out of its seven seasons, TV Guide (2013) ranked it 54/60 in the highest rated programs of all time, and the Writers Guild of America (WGA) ranks it at 69 out of the top 101 best written series of all time. So many accolades. Created by Susan Harris, the show ran along side another 80s hit The Facts of Life. The theme song, written by Andrew Gold and recorded by Cynthia Fee, is also ranked among the top theme songs of all time. No wonder why it is still running and bringing us endless laughter (currently runs on Hallmark Channel). Much like I Love Lucy has never been off the “air” in its entire existence, The Golden Girls has also been kept on a channel somewhere since it first debuted on September 14, 1985. From laughter to tears, these four women have been such a part of Americana and continue to be referenced in pop culture. Not limited to any particular demographic or cultural group, this show transcends all kinds of racial, ethnic, gender, economic, and cultural barriers. But why has this sitcom (situation comedy) continued to be popular for now 31 years? Let’s explore! 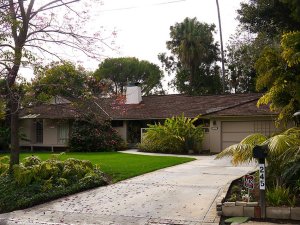 It’s been 31 years since we were first introduced to Dorothy, Blanche, Rose, and Sophia at an upper middle-class home in the residential neighborhoods of Miami, FL. Ever since 1985, these four single older women have been coming into our living rooms and, for many, have become part of the family. The sitcom represents a radical move by the Walt Disney Company and NBC in that the show featured so many taboos, at that time, in broadcast television. In many ways, the show was 2-3 decades ahead of its time. The very unique nature of the show is part of why it was such success. However, the continued success of the show goes way beyond just being uncanny for its day. For a show to stand the test of time, it cannot be, in whole anyway, (1) a product of its generation (2) contain proliferated pop culture references that significantly support the plot (3) must have exquisite writing (4) have a phenomenal cast that is as interesting to watch and listen to as the plots are engaging and (5) contains characters that one can identify with decades down the road. Over all, the show has to be unique, timely, and just written and acted exceptionally well. As this is a sitcom, in short, the jokes and conflict have to still be relevant in society for many years down the road. Although entire critical analysis articles could be written about each of the characters (and actors) respectively, the focus of this article is a general overview of why the show is endearing even to this day. 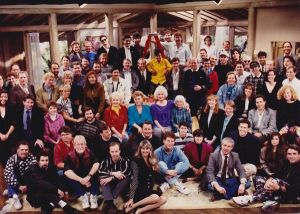 Behind every successful show (especially dialog-driven ones), there is solid writing. After creating the show and writing a few episodes, Susan Harris became less directly involved in the series. The head writers of the show (for four seasons) were Kathy Speer and Terry Grossman who would each receive numerous awards during the series’ run. Following the fourth season, they turned the reigns over to Mort Nathan and Barry Fanaro who would also go to win awards as well. Other than eccentric 80s attire, it’s the comedic conflict, sarcasm, quick witted remarks, and self-deprecating humor that keeps audiences coming back for more. No matter how many times I have seen each episode, I still laugh every time; the shows never becomes boring. The four women boasted incredibly sharp humor and were very secure in themselves. The creative leadership knew that the show had to leave its mark on television. Quite regularly, the plots were used to not necessarily address outrageous ideas, but important ones. Important ideas and values that had not been addressed in television before. What stands out most about the writing? The fact that progressive values were part of the show’s DNA. From ethnic, racial, religious, cannot forget sex and dating, and of course aging. At its core, the Golden Girls simply made aging fabulous! A good test to understand just how brilliant the writing and comedy is by turning off the picture and listening to the show as if it was a radio broadcast. Most likely, you will find yourself laughing just as much as if you were watching it. You can follow the story without the visuals to accompany it.

But isn’t television a visual medium? Yes. However, sitcoms are much more similar to live theatre than small cinema. Part of this is because a traditional sitcom is shot in front of a live audience. Just like stage actors feed off of the laughs from the audience, sitcom actors go through similar motions during a performance. Brilliant dialog and plot structure animates characters, and boy were these ladies animated! You won’t find four closer friends. These ladies could insult one another viciously and still remain intimately, but platonically, close. Each and every episode was so very interesting and feels new overtime. Not even a show like Friends holds up as well as The Golden Girls. The relationship between the four women was incredibly dynamic. Hardly an episode goes by that there aren’t alliances, betrayals, misunderstandings, or love triangles. Sometimes we venture to doctor’s offices, restaurants, or the parks; however, most of the time is spent inside the sun drenched Florida multi-champer house. Comparing the show’s floorpan to the exterior of the house, such a floorpan simply cannot exist. Haha. But that’s part of the fun. Unlike movie or television drama, a situation comedy is able to bend logic and make up for that with comedic timing and material. Moreover, the fashion of the girls definitely cannot be ignored. From flashy to trashy, these girls have it covered. The best part of the fashion choices is that, for the most part, the choice of clothing is an extension of the characters themselves. The fashion alone, is something that could be analyzed and actually has been in the past.

While aging, women’s rights, and dating were reoccurring themes and tied directly to the show’s premise, other once taboo social topics were important milestones in the series’ development as well. Although there are a few social issues that could be mentioned, the one that is the most prominent after the ones that have been mentioned are topics dealing with gay men and women. Nearly a quarter of a century before the Supreme Court’s historic ruling on the legal definition of marriage equality, The Golden Girls had already tackled that subject and brought it into the mainstream. There are a few times that a gay character was the focus of a show, but the episode that stands out the most is when Blanche finds out that her brother is gay (and later there is an episode where he introduces her to his fiancé). This is one of the toughest episodes for Blanche and one other best examples of character development. She faced a situation that thousands of parents and siblings face everyday across the country. Before Will and Grace, Glee, The New Normal, and other popular shows, these four women highlighted real world problems and social issues that continue to be battled today. Indirectly, gay social issues and stigmas were also dealt with. In the episode where Rose is contacted by a hospital regarding the possibility of her having contracted HIV through a blood transfusion, the girls take the then-unpopular stance that HIV/AIDS was not a punishment for being gay but a disease that knows no social, ethnic, sexual orientation, or religious barriers. They brought out the fact that it could happen to anyone. The brilliance of how these once-taboo subjects were handled is seen in how, amongst conflict and tears, the girls somehow still managed to bring humor into the mix, and leave you with a smile.

After watching this show for many years, it still has the ability to make me laugh uncontrollably at times. And, that sentiment is felt by many who have continued to visit the home of Dorothy, Blanche, Rose, and Sophia over the decades. There is so much to explore in this show, and why it continues to be popular today. From the writing to the acting and humorous conflicts to dealing with hard topics of bigotry, disease, sexual orientation, and aging, The Golden Girls continues to be a show that can help you laugh on the worst of days. Although there are shows that have attempted to be a modern day Golden Girls, none can hold a candle to these amazing performers and writers. There is a magic quality to the show that can never be duplicated.