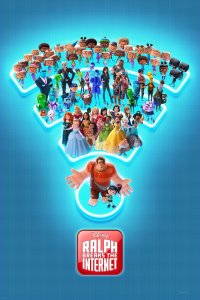 It’s cute and entertaining. The highly anticipated sequel to the Oscar-nominated Wreck It Ralph hits theatres everywhere today. Much like the first film, this sequel relies heavily upon nostalgia and familiarity with pop culture more than it it does a strong narrative. All too often, it’s more concerned with making you laugh than it is delivering a meaningful narrative. However, no mistaking it, you’ll have a fun time watching this film. And sometimes an entertaining story for the whole family is all that is needed to accompany your holidays. Ralph Breaks the Internet took what the Emoji Movie attempted to do, but failed, and delivered a heartwarming story that comments on our usage of and fascination with the internet. Return to the brightly colorful animated world of Ralph and Vanellope for a highspeed adventure that takes them from the 8bit world of 80s video games to the immersive world of a visualized, stylized internet. If it’s gone viral on the internet, then you’ll likely find it in this movie. What we see in terms of abstracts or constructs, this film creatively translates that which only exists in 0s and 1s into something far more tangible. For all that Ralph Breaks the Internet did right, and that constitutes a lot aesthetically, it appears as though the writers were far more concerned with cramming every bit of Disney, pop culture, and digital media into the movie than developing a compelling narrative. And that was the part that I found obnoxious, the amount of time we spent on the Disney brands. It became self-serving instead of plot-serving. That being said, this uplifting movie accomplished what other animated films attempted, making what users do on the internet interesting. Must in the same way that Searching brilliantly captured screen-life, Ralph delivers a sensory explosion of what a visualization of the internet may look like. But who would’ve known that we were all POP Vinyls???

Vanellope is bored with her game Sugar Rush. In order to change the tracks up and give Vanellope a new experience to revive her love of her game, he builds a new track! Unfortunately, this means that Vanellope ostensibly takes control of the game’s steering wheel causing the user to break it off when trying to correct Vanellope’s car. When the arcade owner is unable to find a replacement steering wheel on eBay within his budget, he decides to shutter the game. Unbeknownst to him, he forcibly displaces the citizens of Sugar Rush. With no home to return to, the citizens of Sugar Rush are relocated to other games and the racers are adopted by Felix and Sgt. Calhoun. Ralph and Vanellope are determined to replace the steering wheel by exploring the unknown world of the internet where eBay is located. Upon arrival, it is clear that both of them are way in over their heads. They must rely upon intuition, wit, and the citizens of the internet to help them on their quest to make enough money to buy the steering wheel. Their journey soon leads them to Yesss, the head of the algorithm of BuzzTube, the most popular video sharing site, to guide them through turning likes into cash.

Central to this film are the (1) theme of friendship (2) one’s identity with home or work and (3) commentary on one’s insecurities. A nice trifecta of themes and concepts upon which to build the plot. But there is something missing. Something that is a fundamental to any screenplay. And that is clearly defined opposition to the goal represented or manifested by a character. In other words, there lacks a “villain” in this story. The villain in this story is the friendship shared by Ralph and Vanellope. Suffice it to say, it is not a requirement to have a physical villain (or more precisely, a character of opposition), but when abstracts, constructs, or concepts are the villain, it is advisable to select a character from the story to represent the true enemy. Take Jaws for example. The villain is NOT the shark; it is the folly of man. And in order to visualize this opposition, the screenplay uses the character of the mayor to personify it. Looking at Ralph Breaks the Internet, we go nearly the entire movie before we have a true character of opposition. A central character(s) is only as interesting as the character of opposition. Sometimes, the character of opposition is even more interesting than the central character.

There is also very little struggle experienced by Ralph and Vanellope. Vanellope nearly out races Shank of Slaughter Race the first time and Ralph’s first video and all his subsequent videos go viral. Not having a well-denied villain paves the way for Mary Sue characters. Just good at everything. This ease of success takes away from the ability to empathize with the struggle. That being said, after Ralph and Vanellope have their falling out over Ralph’s obsession with what he feels is best for Vanellope, their friendship is called into question and forced to face the fact that their friendship is evolving. And fighting with friends is something with which we can all identify. When Ralph’s insecurities manifest themselves in the form of a virus that takes over the internet, the movie finally has a villain that we can see, hear, and experience. The lack of a villain in this story affects the ability for the story to be as compelling or interesting as it could have been. One of the dangers of not having a villain in a story such as this one is the risk of disjoined subplots. Without a villain, the central characters have to work exponentially harder to get the audience interested in them. As it is, the audience is far more likely to find the internet setting, product placement, and mentions more interesting than our two central characters. The takeaway: make sure your screenplay has a CHARACTER of opposition.

But Ralph Breaks the Internet is not without well-developed characters. More specifically, a well-developed character in Ralph. Two of the film’s themes are manifested in Ralph. The themes of personal/interpersonal insecurities and evolution of friendship are witnessed in the actions of Ralph and Vanellope, but Ralph in particular. Audiences of all ages easily identify with him because they can observe traits, characteristics, and idiosyncrasies that have likely been experienced by each and every member of the audience at one time or another. How many among us do not depend on some sort of external validation in order for us to feel confident in what we do, what we wear, or where we go. We empathize with Ralph when his demonstrably gentle, generous soul gives way to self-destructive behaviors that form a wedge in the friendship between him and Vanellope. And that leads us into the third main theme of this film, and that is the theme of the evolution of friendship. There is no questioning the strength and loyalty of the six-year-long friendship between Ralph and Vanellope. There have been many movies that comment on the state of or evolution of our best friendships, but none quite so creative as this one. However the plot may be lacking in its ability to be truly compelling, the mountains and valleys of the central friendship are ones that many of us can identify with. It’s also a great opportunity to teach kids how their lives may go in different directions from their friends but that doesn’t mean that the friendship has to die or become burdensome. Children (and all of us, really) learn that sometimes when you love someone so much that you have to let them go to pursue their own dreams because that’s what friends do–selflessly support one another’s dreams.

Despite the inundation of recognizable brands and incessant, obnoxious Disney product placement, Ralph Breaks the Internet is an entertaining animated movie that finds a way through the underwhelming plot and constant reminders that we are in a visualized world of the internet into our hearts to brighten our holiday weekend.