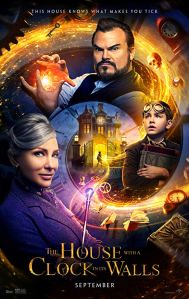 Whimsical and terrifying. A departure for the maestro of gory horror movies, Eli Roth’s foray into children’s horror-lite cinema is a hit! The House with a Clock in its Walls is the film adaptation of the 1973 novel, by the same name, written by John Bellairs. While there is a childlike wonder about the film, Roth’s trademark stylistic direction is clearly seen in brief glimpses into the movie’s much darker and disturbing moments. Already a rumored house for next year’s Halloween Horror Nights at Universal Studios Hollywood and Florida, this film provides many opportunities to adapt the house and its inhabitants into a fantastic haunted house maze. Jack Black and Cate Blanchett are incredibly entertaining, and offer an incredible banter that will leave you wanting a friendship like the one shared by these two characters. Our leading young star Owen Vaccaro is less interesting to watch and displays terrible crying skills; however, he does deliver a performance that shows he has potential to grow as a child actor. Although the movie largely takes place within the victorian mansion, it never feels limiting or redundantly boring. Eli Roth’s expertise for visual storytelling makes every room just an interesting as the previous one. For a children’s horror movie (what I’m calling horror lite), it has some scares and twisted moments that are actually terrifying if you stop to think about it. Roth takes this PG movie as close to a PG-13 movie without ever crossing that line. Never evoking strong emotion, you will still find moments that you will laugh and jump!

When Lewis’ parents are killed in a tragic accident, his estranged uncle Jonathan (Black) send for him to move to his mansion in Michigan as he is the only family Lewis has. After Jonathan uncouthly picks him up on the bus, Lewis begins to wonder what he’s gotten himself into. Nothing could have prepared him for what he was about to encounter in the mysterious mansion. In very little time, Lewis learns that his uncle and their intelligent, feisty neighbor Mrs. Zimmerman (Blanchett) are practitioners of of the magical arts, to the highest degree! With his eyes now opened to the fascinating world of magic, Lewis expresses an interest to learn magic himself. Struggling to make friends in his new school and neighborhood, Lewis tries to impress the student council president by raising the dead; but unbeknownst to him, Lewis unleashes an evil warlock who seeks to bring an end to humanity. It’s a race against the mysterious, hidden clock within the walls of the mansion to stop the warlock from destroying the world and all its inhabitants.

A perfect way to introduce kids to horror films, Eli Roth’s The House with a Clock in its Walls strikes a perfect balance between maintaining a kid-friendly plot while strategically including terrifying imagery. Although I watched Alfred Hitchcock Presents and The Twilight Zone with my mom growing up, it would be a while before I truly found that I absolutely loved horror films. Fortunately, kids of the 90s had more options for gateway horror than kids today. When I was a kid, I had Nickelodeon’s Are You Afraid of the Dark? and Goosebumps to introduce me to horror. Sadly, there do not seem to be nearly as many options for today’s kids to discover a love of horror early on. Mainly, that’s because filmmakers are more concerned with creating horror movies and TV shows for teens and adults due to  the increased gory, sexual, and disturbing content. Thankfully, one of the masters of horror took it upon himself to channel his 10yo self in order to adapt his penchant for popular, cult classic horror to provide a great experience for kids. And Roth did a superb job! Perhaps Roth does not bring his trademark torture porn and queasy horror to the screen in this children’s movie, but he does apply that same ability to scare us to the macabre puppets, man-eating topiaries, and demonic hand licking. That tongue was soooo Roth. Love it.

The production design is brilliant! Instead of relying upon digitally conjured terrifying or whimsical effects, this film largely delivers practical effects against the backdrop of a tangible set. That’s not saying that there isn’t CGI in the film, there is quite a lot. But it never takes me out of the world that Roth created for the screen. As I am not knowledgeable in architectural design, I am not sure if the setting is more Baroque or Victorian, but it’s gorgeous! The setting was quite immersive for a children’s movie, and gives the film a sense of dimension that is so often lost in 21st century movies. Editors and graphics designers are so preoccupied with whether or not they can achieve the effect that they don’t stop to think it is will detract from the believability of the setting and set-builds.

With Roth directing, this film benefits from its emotional beats, turning points, and moments of shock and terror being placed and executed with precision. Whereas a gateway children’s horror film cannot have much, if any, true body horror, it can include imagery that lends itself to more conventional horror such as evil Jack-o-lanterns, clown puppets, and ventriloquist dolls. Think of this film as introducing young audiences to those same tropes, that adults love about horror films, but in innocuous ways that may be just above a kid’s head but close enough that it may ignite an interest in horror films. Sometimes Roth’s more horrific elements of this film are witnessed as lurking in the shadows. Sort of a nod to his legacy but everything is still masquerading around as a family-friendly horror movie. In addition to talking about the horror and magical elements of the film, the plot is pretty simple and is ostensibly about the true sprit of family. Although each of our three main characters could, in many ways, not be any more different from one another, they all have a love of magic, education, and loyalty. Furthermore, each of them has suffered the loss of loved ones that leaves an empty hole in their respective hearts. Through these common interests, Jonathan, Mrs. Zimmerman, and Lewis form a bond that enables them to form a new family. If there is something conspicusoly missing from the plot, it is more of an exploration of post WWII trauma.

If you’re looking for a family-friendly gateway horror movie to watch, then definitely check this one out. The House with a Clock in its Walls proves that there is a need for more TV and film programming that is suitable for younger audiences who want a good thrill just like you and me. One thing is for sure, this film sill undoubtedly prompt young audiences to open their minds to the amazing world of horror movies, or perhaps scare them away.