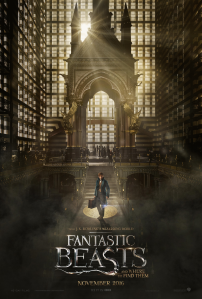 Spellbinding! Return to J.K. Rowling’s wizarding world in this fantastic film filled with phenomenal cinematic storytelling and mesmerizing magic. Warner Bros.’ Fantastic Beasts boasts incredible talent on and off screen that is sure to strike both a nostalgic cord with audiences as well as renew a sense of wonder in this new epic tale preceding the events of Harry Potter by more than six decades. From the flawless editing to the character dynamics, this film is definitely one to look for in the technical categories during awards season. Fantastic Beasts is also the first time that fans of Rowling’s wizarding world will witness a film based on an original screenplay and not a work of literature. After watching this movie that essentially extends a wildly popular and successful film franchise, it is clear that ‘the magic awakens’ in a manner that is destined to thrill the dedicated fanbase and ignite the passion of new fans. Whereas the last time a franchise was ‘awakened,’ it felt like a mashup of that which had been heard and seen before, Fantastic Beasts provides audiences with completely new characters in a new city facing all new challenges in a world that echoes the past but is clearly a new fantastical frontier.

Many decades before Harry Potter and Lord Voldemort would cross wands, across the pond a whole new world of witches, wizards, and fantastic beasts is beckoning for adventure. While on a rather academic expedition to locate, identify, and protect magical creatures, Newt Scamander (Eddie Redmayne) arrives in New York City to transport and collect the final creatures he needs to complete his zoologic study and publish his research. Unfortunately, this expedition is all but academic. After bumping into no-mag (no-maj/no magic) Jacob Kowalski (Dan Fogler) at the bank, Scamander mistakenly swaps briefcases with Jacob and unwittingly releases the magical creatures to roam about the big apple. With bizarrely unexplained events in the no-mag world causing people to pry into the magical world with risk of fully exposing it, Newt’s creatures become the target of the American magical congress. After bumping into an unlikely nemesis turned ally Porpentina Goldstein (Katherine Waterson) and her adorable sister Queenie (Fine Frenzy), teaming up with Jacob, Newt and his friends must capture all the magical creatures and solve the mystery of what is actually reeking havoc in both the magical and no-mag worlds.

Before analyzing the film’s content, I think it’s best to step back and look at the larger picture here. This is the first time that one of Rowling’s wizarding movies is not based on one of her novels, plays, etc. Furthermore, this also makes the fourth time, for all intents and purposes, in recent years that a popular film franchise with a highly dedicated fanbase is being extended (on the front and/or backside). The other three being: Star Wars, Jurassic Park, and to a lesser extent Star Trek; yes, there are other popular franchises that are being added to, but they are mostly perpetually continual ones like Marvel, DC, or the Scary Movies, etc. Although Fantastic Beasts was highly anticipated upon the initial teaser trailers and social media traffic, the elephant in the room was whether or not it would go by way of The Phantom Menace and Jurassic Park III or The Force Awakens and Jurassic World. Thankfully, this return to the wizarding world appears to be going by way of the latter! Still too early to tell if it will truly reignite a fandom in the way the extensions did for the Star Wars and Jurassic Park franchises respectively, but the storytelling is solid and refreshing. Extending a wildly popular but essentially complete franchise is a dangerous road to go down, but Fantastic Beasts is successful in its endeavor to return audiences and fans to a world of magic and adventure.

The first cinematic element you will notice in the movie is the editing, inclusive of special effects. The prologue sequence was an incredibly brilliant way to reintroduce the audience to the wizarding world. I thoroughly enjoyed the innovative approach to integrating the magical newspapers into the opening sequence following the prologue. Although I am not a fan of 3D movies–ordinarily–I imagine that this sequence would provide quite the high degree of spectacle if watching the 3D version (which I did not do). It would not be surprising if this film gives Rogue One a run for its money in the visual/sound effects, editing, and score categories during award season. One element I was specifically looking for was the use of practical effects, props, and animatronics since it’s a film about magical creatures. I watched an advanced screening of Allied immediately before watching Fantastic Beasts; so, be honest, I need to watch it again to locate and identify uses of practical effects or animatronics. But I believe that, to a small extent, some of the scenes including interactions between the human characters and creatures used animatronics. When animatronics and CGI are used in a film–especially in the fantasy/adventure or sci-fi genres–the result is authenticity and a realness that cannot be achieved otherwise.

Eddie Redmayne delivers an outstanding performance as Newt Scamander. Absolutely flawless. From the lack of eye contact to the facial twitches to the over-all manner in which he carried himself, Redmayne does an exceptional job of bringing this character to life. Not having any books to base his characteristics off of, it was important to provide audiences with a protagonist who was both entertaining to watch and find a place in the hearts of fans in two hours. Both were definitely accomplished. Joined by an amazing cast of chief and secondary supporting players, the brilliant direction of David Yates is seen in all the character dynamics throughout the movie. I greatly appreciate the lack of developed physical romance or attraction between Newt and Porpentina and instead the mild romantic subplot involve the sexy Queenie and lovable Jacob. The villains are nicely developed as well. Of course, the best part is not quite knowing who the villains are. Going into that in more detail will give away too much; however, there are many options for villains, anti-heroes, and allies so sometimes you will not be certain who’s an ally, villain, or anti-hero or someone who was thought to be a villain turn out to be a possible ally. Although there are definitely some predictable elements in the movie, there is sufficient enough unpredictability that it will keep you guessing and engrossed in the storytelling.

Prepare to be whisked away to J.K. Rowling’s wizarding world! I cannot wait to see how Universal Orlando/Hollywood will integrate this new series into the Wizarding World of Harry Potter into their parks and resorts. The famous Harry Potter Studio Tour in England may have some new additions as well. Fantastic Beasts and Where to Find Them is a delight for the whole family and is sure to generate new fans while appealing to and satisfying legacy ones.

4 thoughts on ““Fantastic Beasts: and Where to Find Them” movie review”