It’s no secret that the Walt Disney World Resort (WDW) is undergoing some massive builds and refurbishments. With Universal Orlando (UO) stealing the leading market share from the media and entertainment conglomerate’s flagship resort, Disney is running to catch up. Although there are a number of refurbishments and builds presently taking place, the one that is the most obvious and potentially dangerous is the near-reboot of Disney’s Hollywood Studios (DHS). Just this week, it was announced that the extremely popular thrill ride Rock ‘in’ Roller Coaster is soon to be closed for a relatively short amount of time; however, during this time, all references to Aerosmith will be removed. Whether that is due to inside or outside influences is not what’s really important. What IS important is the number of closures over the last couple of years and even ones that are reported to be taking place within the next few.

For the latest in theme park news and information, head over to Thrillz where you can read this and other articles. From the United States to Eurpoe, Asia, and beyond, the team at Thrillz.co has got it covered!

It’s the late 1980s, and then Disney CEO Michael Eisner has an idea for a new theme park at WDW. Unlike other parks which were more strategically planned, this one has a rather spontaneous birth. In short, Eisner desired to put a movie-based ride at Epcot. The name of that attraction? The Great Movie Ride (GMR). Sound familiar? From that attraction concept sprung the now Disney’s Hollywood Studios. The genesis of this park parallels Universal Studios Florida in many ways. Both began as Florida production counterparts to their respective Los Angeles headquarters and both opened within one year of one another featuring attractions based on film/TV IP; furthermore, both parks were active film and television production facilities and offered tours, live audience opportunities, and meet and greets with some of the stars. Back then (from 1989-2008) DHS was named Disney-MGM Studios with a scale replica of Grauman’s Chinese Theatre as the centerpiece. The operating hours were less than Magic Kingdom or Epcot because of the few offerings, so DHS was originally operated as a half-day park. The design of the park was mostly based on the idea of Hollywood at the hight of its golden age in the 1930s and 40s. From the buildings to the backlot, it was clear that this park was celebrating the art of motion pictures.

Here is a map of the park at the height of attractions offerings (minus Toy Story Midway Mania and The American Idol Experience both added in 2008). 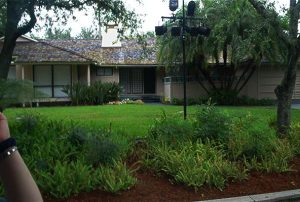 During the late 1990s and early 2000s, both Disney and Universal began to phase out the Florida production facilities. With that phasing out, the connection to the art of motion picture making began to mitigate. Specifically speaking about, Disney-MGM Studios, there were two major changes that directly affected the identity of the park during this first period of flux. While many may not recall the set tours of Adventures in Wonderland or playing Who Wants to Be a Millionaire, many long-time fans and guests of the park will remember the closure of Residential Street (part of the Backlot Tour) to make way for the now-closed Lights, Motors, Action Stunt Show. Residential Street included, among other houses, THE Golden Girls‘ house (used for the exterior shots starting in the 2nd season). During the pilot episode and the first season of the critically acclaimed show–still–with a huge fan base today, the house seen in the exterior shots (which you can drive to today) was/is located in Brentwood, CA. But I digress. With the closure of Residential Street, the now-closed Backlot Tour had to be reinvented to accommodate the new stunt show. This closure represented the first steps in the eventual identity crisis of the park.

Regarding the addition of new attractions, the 1990s were a booming time for DHS because in 1994, something huge dropped in. The iconic and popular flagship attraction The Twilight Zone Tower of Terror (TOT) opened on Sunset Blvd! At the time, it was considered the most technologically advanced theme park attraction in the world. The attraction was so popular in Florida that a counterpart was constructed at Disneyland as part of Disney’s California Adventure (DCA). Sadly, Disney has confirmed all rumors and timeframes regarding the rebranding of the DCA Tower of Terror to be rethemed with Guardians of the Galaxy. Beauty and the Beast: Live on Stage and The Tower of Terror welcomed the addition of Rock ‘in’ Roller Coaster Starring Aerosmith (RRC) in 1999. RRC was the first (and still only) roller coaster at DHS and continues to be a huge draw today. In addition to the 1990s welcoming TOT and RRC, Sunset Boulevard would also become the home of the nighttime spectacular Fantasmic! With room for close to 10K park guests, Fantasmic continues to be a popular show that requires guests to arrive 1-1.5hrs prior to showtime. However, the popularity of Sunset Blvd is not immune to radical changes. As you may be aware, and as I wrote in the opening paragraph, it was announced recently that RRC will be undergoing a short but drastic refurbishment in the next month that will transform the coaster into a more generic version of its current self. (Personally, I’d like to see RRC Starring Journey, 21 Pilots, Bleachers, or a range of songs by bands/artists about rollercoasters).

The mid to late 2000s began to see some changes that would completely redefine the identity of the park as it continued to move away from the production of television and film. From Residential Street to the center of the park, due to licensing issues with the then new owners of the real Grauman’s Chinese Theatre, Disney erected Mickey’s Sorcerer’s Hat to serve as the centerpiece for the park and as the logo for marketing. In retrospect, the erection of this hat upstaged the Chinese Theatre, representing the end of the first season of Disney-MGM and ushered in the second season. Contrary to popular opinion, the hat was not connected to the eventual renaming of the park in 2008 but the result of the owners of the Chinese Theatre wanting more money for the famous Hollywood landmark to be featured in marketing materials. Obviously, if you have been to the park in the last year, you have noticed that the Chinese Theatre is back to being the centerpiece thanks to–again–new owners of The Chinese Theatre (TCL). It would appear that DHS is going back to its roots in the art of motion picture production, but that may not be the case. While the entrance to the park is almost back to its vintage state, the rest of the park is being redefined and is presently in a state of flux as the seasons change once again.

Even before Star Wars and Frozen, DHS was already in a identity crisis. The most notable change, whether you are a park regular or not, was the complete renaming of the park in 2008 from Disney-MGM Studios to Disney’s Hollywood Studios (on that note, the park will be getting a new name again with the opening of Star Wars and Toy Story lands). Although the renaming is partly due to the disconnect from motion picture making, it is mostly due to MGM falling into bankruptcy. 2008 continued to be a big year of changes with the opening of the still-popular Toy Story Midway Mania attraction located in the Pixar area near then-Animation. Furthermore in 2008, DHS opened the now-closed American Idol Experience (licensed from Fox). It took the place of Doug Live in the show building that was vacant from 2001-2008. From 2008-2012ish, it was extremely popular and hundreds, if not thousands, of park guests auditioned everyday. Towards the end, the attraction would have to cancel shows because so few guests auditioned. The attraction finally closed its doors at the Superstar Theatre in 2014 to make way for the Frozen Live show that can now be seen daily. More recently, the–what was left of the–Backlot Tour is now closed, 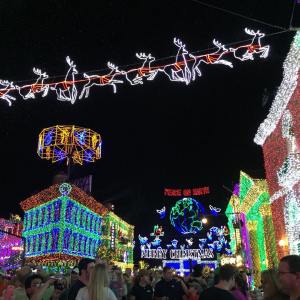 along with the Honey I Shrunk the Kids playground, Streets of America (home to the now deceased Osborne Family Spectacle of Dancing Lights during the holidays); and it’s rumored that in 2018 that The Great Movie Ride (GMR) will be massively rethemed to a Mickey dark ride. Supporting evidence of this is in the decline to renew the–actually still new–licensing agreement and sponsorship of GMR by Turner Classic Movies. The removal of GMR would essentially mean the park will lose all connections to the original idea for the park. Theme park researchers are also predicting the closure of the Indiana Jones Stunt Show to make way for more Start Wars. Looks like DHS is moving into season three of its life. What does all this mean?

Here is a map of Disney’s Hollywood Studios today. Notice anything?

It is clear that this park is continuing to truly find and solidify its identity. If you look at the map above, you will notice that there are far fewer offerings than in the mid-late 2000s at DHS. This new season of DHS is simply the next in a long history of fluctuations. Originally designed as a half-day park, it appears as though DHS is unofficially returning to that model–for now, anyway. Once RRC closes (even though it is for a relatively short time), there will only be a few rides left: Star Tours, Great Movie Ride, Tower of Terror, and Toy Story. As far as other attractions, guests will still be able to enjoy Indiana Jones, Frozen, Beauty and the Beast, Fantasmic, Little Mermaid, and Muppet Vision 3D. Comparing that list to what was offered in DHS’ prime years, the offerings are somewhat anemic. Although it is too early to announce a target opening date for either Toy Story or Star Wars Lands respectively, Disney is known for prolonged expansion construction. So, it is safe to assume that we are looking at 3-5yrs until the lands open. The danger in closing so many attractions over the years and nearly cutting the park in half (when it was already small) is a potential side effect of a significant drop in guest numbers. Hopefully, the numbers will climb back up once the lands open.

That being said, here is an idea. It’s no secret that Disney is presently losing out to Universal. Of all the parks, DHS is definitely seeing the sharpest decline in numbers (which translates to revenue). Not knowing what the daily operating cost of the park is, I can only speculate; but,  WDW may be in a better position if it were to completely close DHS for 18-24mos and ramp up the construction of Star Wars and Toy Story. With the park remaining open, the construction moves more slowly than if the entire park were to shut down. Cities have proven that this approach works when it comes to massive repairs or expansions of expressways. Would you rather keep a park open that has a few attractions and the new lands take twice as long to build or would it be better to close the park (which could potentially save money in the long run) and the lands open up in half the time? Whatever the case, it’s definitely something interesting to think about. All we can do is watch as Disney’s “movie” based theme park transforms yet again. On the plus side, the new lands look awesome! I will, though, miss the magic of the movies at this park.

Me and my sister during her first trip to Disney World.

1 thought on “A Theme Park in Flux”