Instead of researching my next article this past weekend, I spent time with family at Universal Orlando. But, in spending time with my family visiting from out of town, I definitely have some thoughts that I’d like to share. Nothing truly profound, but occasionally it’s refreshing to write on a more personal level instead of always being committed to scholarly writing. Much like thousands of other families, I grew up going to the parks. Needless to say, I did not frequent them like I do now–every week. I did not live in Florida until I was 24, so we would plan family vacations to Orlando every so many years. Since my sister and I grew up on Nickelodeon moreso than the Disney Channel, when we were old enough to appreciate the experience, our parents took us to then Universal Studios Florida to “ride the movies” and experience THE Nickelodeon Studios. Although there is a lot to enjoy about the present-day Universal experience, our favorite stories are from the early days of the park. Obviously, childhood memories are often more powerful than present ones by default, so there is definitely some degree of subjectivity in remembering the original park(s); but I digress.

Check out this promotional video from 1990 when the park opened

It’s been 10 years since the whole family went to Universal Orlando. The last time the whole family was together in the parks was at Disney World in 2011 (when I was a Cast Member). Since I bought my sister a Universal Annual Pass, she gets down here a couple times a year but we had not been to the park as a family since 2010. If you have been going to the parks (whether Disney, Universal, SeaWorld, or Busch Gardens) for as long as I have, you get to witness the evolution of the parks and the continual reimagination of attractions and themed areas. Most of the time the change is positive and beneficial, but other times the changes are disappointing. I think that sometimes we forget that the parks have to reinvent themselves every generation in order to keep the guests coming in. That means that iconic attractions sometimes have to go, despite what long-time fans think. Other times, the addition of new attractions is outstanding! This is certainly the case with the Wizarding World of Harry Potter at Universal Orlando and the future Star Wars Land at Disney’s Hollywood Studios. As my research has shown, nostalgia is an important element in the success and popularity of a theme park; but there is certainly more to the planning, development, and logistics of future offerings than just nostalgia. 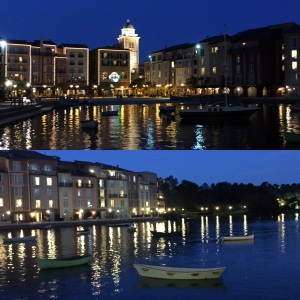 If I had to name just one element of my staycation that made it feel like a family vacation, it would have to be pulling up to and staying at the Loews Portofino Bay Hotel on site at Universal Florida. It wasn’t simply the fact that Loews has done an excellent job at recreating the quaint Italian waterside village, but that it felt like an escape from my normal every-day trips to the park. As a kid, I remember when there was no Portofino Hotel period and later on I remember passing it when walking to the park entrance from the Holiday Inn across the street where we stayed multiple times. Now, this was not my first stay at Portofino. I did stay there with my aunt and uncle’s family back in September 2010; but this was the first stay with my immediate family. I arrived before my family in order to get us checked in. When I went out to move my car to the parking garage, I ran into them and it was really cool to get to meet at the hotel. Maybe that is not very descriptive and lacks critical analysis, but it really was memorable since we were meeting at a hotel that we passed by and always wanted to stay at, and not having that opportunity previously, thanks to my annual pass discount haha.

One of the results of going to the park with my family or with those who have not been in a long time, or at all, is experiencing what it’s like to see the sites, hear the sounds, and riding the attractions, or watching the shows for the first time–vicariously anyway. Not that I don’t enjoy frequenting the parks as often as I do, but it’s always refreshing to get to smile, laugh, and enjoy the attractions like it’s the first time all over again. I cannot tell you how much I loved witnessing my parents’ reaction to the rides. I don’t think there is any time like the first. Hearing their respective reactions to what I enjoy all the time from their perspective was as enjoyable as the attraction itself. The expressions on their faces were priceless and created memories that will last for a lifetime. In addition to visiting new attractions (for them), we also revisited the remaining two opening day attractions that we’ve experienced as a family many times: E.T. the Adventure Continues and the Horror Makeup Show. I don’t think I will ever forget what it was like to meander through the E.T. queue as a kid. The feeling of what it must’ve been like to work on the movie will last forever. Even on this recent trip, my family and I still talk about that queue. Just waiting in queue for the timeless dark ride brought back so many fond memories. Although the hotel experience was probably what made this feel like a vacation for me, it is riding E.T. with my family that was the most exciting for me. Even when I am in the parks for a few hours or a day, I still ride that because it always takes me back to being a kid in the 90s at Universal.

Vacationing in a family favorite theme park is not limited to waxing nostalgic of the past, but it’s also about creating new memories in the present. I think the funniest picture I took of them was when my parents and a family friend tried butterbeer for the first time! They absolutely loved it and got it twice during the 2.5 days in the parks. They were simply in awe at the beautiful architecture and creative engineering of the Wizarding World of Harry Potter. Forbidden Journey was definitely the favorite attraction between Diagon Alley and Hogsmeade. Of course, they thoroughly enjoyed the train experience as well. Remarked over and over how it makes them want to take a real train for recreation sometime. For everyone, except me, riding Skull Island: Reign of Kong was a new experience! And, I had only ridden it once before (after which I wrote my critical analysis). Unfortunately, it did not qualify for the unlimited Loews express passes, so it was definitely the longest line; however, a much shorter wait than when I first experienced it. I loved being able to form new memories with my family at this ride. Until this trip, there were attractions that I would experience with friends or when my sister would visit me at which I did not have family memories. And, to that point, there was always an element missing from the experience. Nothing major, just a little feeling that felt empty. Now that we have experienced everything at the park, I have fond memories that I will continue to cherish for a lifetime as I have done since going to the park as a kid. Although there are family favorites that are no longer there, such as: Nickelodeon Studios, Hitchcock: the Art of Making Movies, Murder She Wrote, Lucy: a Tribute, Jaws: the Ride, and Earthquake: the Big One, I have had the opportunity to create new memories that will one day, in and of themselves, become nostalgic.

Out of all the kinds of family vacations that one can think of, I firmly believe that theme park vacations are responsible for some of the most beloved memories. Whether you are from a traditional family or you were adopted, theme parks are places of magic that inspire, intrigue, and beckon for returned trips. I am thankful that I have so many fond memories at not only Universal, but Disney World, Busch Gardens, Carrowinds, Cedar Point, and the little known Magic World (formerly in Gatlinburg). If I was able to anecdotally designate the chief contributing factor to why theme parks make great vacations or simply lasting memories, I would venture to say that it’s because they provide experiences and interaction. Because one is physically and emotionally experiencing something, it is far more powerful than simply visiting a landmark or watching a movie.