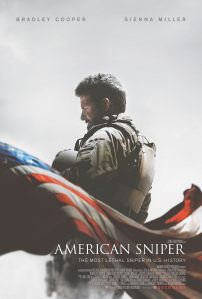 This movie represents Clint Eastwood’s finest work. From start to finish, this film will command your attention and emotions on this journey that appears to show the various tolls war has upon the human mind and body in a realistic and authentic manner that neither glorifies nor undermines the travesties of seemingly endless battles for justice and freedom. Specifically, the movie will take you on a journey into the many tours of duty in Iraq through the vessel of Navy SEAL Chris Kyle. I am not usually not a fan of war movies; however, this movie, like Zero Dark Thirty, is one that truly shows that excellent storytelling, beyond the gun fire and deaths, is possible in a well directed, written, and produced war film. American Sniper will take you from your seat and place you on the battlefields in Iraq and into our hero’s home.

Prior to becoming a legend amongst Navy SEALS, Chris Kyle (Bradley Cooper) is a stereotypical Texas cowboy who focused way more on his career than his girlfriend. Going from a self-centered cowboy to a self-sacrificing soldier, in the US Armed Forces, Kyle is inspired because of the bombings of US Embassies in the 1990s. Older than the average soldier, Kyle faces transforming his mind and body to serve his country. After his superiors witness the extreme precise skill and talent Kyle has for sniping, he is assigned to an elite squadron in the SEALs. While training, he meets his soon-to-be wife Taya (Sienna Miller) and falls madly in love. Following his marriage, he is deployed to Iraq. Returning home between duties, the atrocities of war begin to reek havoc on his relationship with his wife and two kids. Eventually, he reaches the point that he realizes that he wants to come home physically and more importantly mentally. Through helping other soldiers that are having physiological and psychological struggles, he is able to help himself. He shows himself to be both a hero on the battlefield and at home.

Two of the elements that stands out for me the most, in this film, are the structure and pacing. Although, it is over two hours, it will have your attention in such way that you will be oblivious to the above-average runtime of the film. Like a well-written screenplay should, this movie grabs your attention within the first five minutes. Ordinarily, a writer or director can get into trouble when working with flashbacks and parallel subplots. But, this movie handles both the main and subplots very well, and artfully weaves them in and out of each other. Dialog is one element that can easily suffer in a war movie, but the dialog is compelling and visceral. The audience truly gets to know Kyle as a soldier, a husband, friend, and father. Unlike other war movies or movies featuring characters suffering from post-traumatic stress disorder (PTSD), this is one of the first to truly show it in a realistic way. Not all soldiers who suffer from PTSD are completely socially or mentally debilitated, I imagine most deal with it in more subtle, but no less harmful, ways.

The movie was very well cast, and each of the principle and supporting actors bring their respective character archetypes to life for the audience. But, as convincing and authentic the performances were, none of the actors faced challenging characters to portray. The performances by Cooper and Miller were excellent, but on par with what is expected of accomplished actors; although, there are moments when the emotions fly and exceptional performances are witnessed throughout the narrative. To his credit, this is one of the best performances by Cooper, and it is of no surprise that he is nominated for Best Actor at the Oscars.

American Sniper is truly a classically written, directed, and produced film that is worthy of the Oscar nominations it has received. It is a dynamic cinema experience that most will likely enjoy. Unlike other war movies, this one chooses not to highlight the battles themselves nor the strategies and deaths, but it takes you through the life of an American hero.