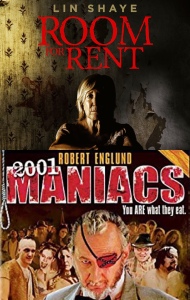 Lin Shaye double feature! Traveling over the Memorial Day weekend, I heard The Final Boys review of 2001 Maniacs and Let’s Watch Horror Pod‘s review of Room for Rent (2019). Both reviews instantly prompted me to watch these movies. So, last night, instead of going to the cinema to watch Brightburn, I decided to have a “late night, double feature, picture show” to quote one of my favorite movies. Aside from both of the movies featuring the horror queen Lin Shaye, there is little similarity between them, yet they are excellent companion pieces. Instead of individual reviews, I decided to combine both of them in one article, and talk a little about each. Shaye delivers an outstanding, dynamic performance in Room for Rent and horror legend Robert Englund is terrifyingly entertaining in 2001 Maniacs. Both movies are completely different tonally, but work very well together. I recommend starting with Room for Rent, then watch 2001 Maniacs, because the former shares a lot in common with a dark drama whereas the the latter is a horror comedy. With Lin Shaye in both movies, I would have loved to have seen an Englund cameo in Room for Rent, perhaps as one of the delivery guys. In short, I highly recommend both of these movies as they were so much fun to watch and feature some noteworthy performances from Shaye and Englund. 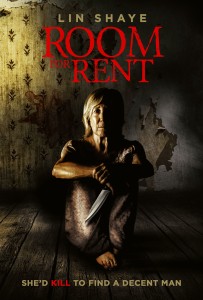 She’d kill to find a decent man. Directed by Stuart Flack and written by Tommy Stovall, Room for Rent takes you on a journey into the twisted mind of a grieving widow and her delusional methods to cope with her loneliness. Joyce Smith’s (Lin Shaye) husband suddenly passes away, and leaves her with a mountain of debt, an empty money market account, and an anemic checking account. After an attempted sexual assault by a group of teenage boys, she is left in an increasingly dark place. Following reading an article on how to passively make money, she decides to turn her big house into a bed and breakfast with longterm rental options. When her first group of tenants doesn’t work out for her, she meets a young drifter at the supermarket and interests him in her room. Joyce instantly becomes obsessed with her much younger man, making him the object of her deepest, darkest romantic and sexual fantasies. When a friend’s betrayal derails Joyce’s delusional fantasy, she seizes control of her circumstances, and sets out on a deadly mission to secure that which she deserves to have in her life.

After the birds-eye-view shot of Sedona (reminiscent of the opening shot from Psycho in Phoenix) you are plunged into the midst of death in a nice middle-class neighborhood. From the moment that Joyce Smith (Shaye) appears on screen, it is clear that Shaye is completely immersed in the character, much as we have come to expect from her more than 90 feature length films (many of which are horror). The first several minutes of the movie gives us the opportunity to witness the immense, diverse talent of Shaye as she is playing a character unlike the ones with which we are most familiar. She takes complete command of the screen and delivers an outstanding performance as a grieving widow whom is also likely suffering from some form of PTSD. The level of empathy I felt for her was incredibly high. Her performance as Joyce is compelling and organic. The degree to which she can effectively and seamlessly transition from sinister to friendly is fantastic. Even when she begins a scene with a smile, as she enjoys watching the skater boys, she transitions to absolute fear as she is terrified by the boys yelling obscenities at her that eventually devolve into attempted sexual assault while laughing at Joyce. But we witness her strength when she, pushes one of the boys off her and loudly threatens to kick his ass. Beyond self-defense, this is the first glimse into just how incredibly complex the character of Joyce is, not to mention a notable performance by Shaye. She carries this phenomenal quality through the entire film in each and every scene, which is even more notable because she is in nearly every scene. She sets the bar high in the first act, and carries it through Acts two and three.

While there isn’t much to spoil, as the obsession plot is one that we have seen before, there are some fun twists and turns in this story that keep the interpretation of this premise interesting and fresh. There are three elements at play in the plot (1) grief (2) older women in love with a younger man (3) and obsession. All three of these work together to provide audiences with more than an arthouse horror film (and yes, this film has far more in common with arthouse horror than commercial horror); they work together to deliver a plot that is simple on the surface, but the complex central character affects the story in such a way that it is thought-provoking and terrifying. A tremendous amount of depth exists in this story if you look beyond the surface. Unlike many slasher or psychotic killer movies, in which the plot or characters are not realistic, the entire plot is stepped in realism and Joyce is a believable central character. Moreover, the tenants and neighbor are also believable. Perhaps what makes this movie frightening is the notion that this could very well happen. It will at least make you think twice before renting a room from an elderly woman off Craigslist or AirBnB. 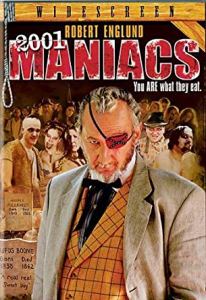 You are what THEY eat. Co-written and directed by Tim Sullivan, 2001 Maniacs is an absolutely entertainingly fun horror comedy! And surprisingly, it is a remake of Gordon Lewis’ 2000 Maniacs (1964). While many (if not most, IMO) remakes are not on par with the original and take what made the original so special and fun and suck out the life in exchange for special effects or popular actors, from everything I’ve read, Sullivan’s 2001 Maniacs is superior to the original in every way. And I am not just talking the production quality; I am talking about the story, cast, characters, setting, and of course kills! While I have not seen the original, I read a few articles that were unanimous in the praise of this remake. So next time you are asked for horror remakes that are better than the original–now you have an additional response and don’t have to use The Thing all the time. Not to oversimplify, but it is more accurate to state that this movie is a reimagination of the original, but for all intents and purposes, it is often regarded as a remake. One of the reasons for the cult success of 2001 Maniacs is that it doesn’t try to improve upon the original, but takes what made the original work and interpret it for a new generation. Everything you want to see is there: cannibal confederates, rednecks, an eccentric mayor (played by horror legend Robert Englund), horny attractive college students (both straight and gay), and cliche virginal stereotypes.

This campy, gory movie features a group of college boys on a road trip bound for the sun and fun of Florida from a university in the northeast. Of course between New York and Florida lies the deep south (as Florida is really an extension of New York haha). Spring beak fever sets in as the boys finish up their last class before hitting the road with nothing but booze, love, and sex on the brain. After losing time on the road due to hitting an armadillo and a chance encounter with another group of equally horny college students heading for Florida, all the students take an unexpected shortcut that lands them in the (laughably inappropriately named) town of Pleasant Valley. A decision that will forever change their spring break plans. When the enthusiastic, overzealous town mayor invites the yankees to stay for the annual jubilee and BBQ, both the boys and girls accept the invitation and enjoy everything that Pleasant Valley has to offer. While on their respective sexual conquests, the students begin to disappear one by one in the most gruesome, yet creative fashions.

Robert Englund shines as the bombastic one-eyed confederate mayor that could make a living selling ice in Antarctica. Although he may not be playing his iconic role of Freddy Krueger, the same charisma is channeled into the mayor. I cannot think of anyone else who could have brought this character to life as successfully as he did. The mayor’s counterpart of Granny Boone is played by fellow horror icon Lin Shaye. She is so much fun to watch in this role that takes her from kind-hearted grandma to sadistic executioner. Perhaps she isn’t the lead in this movie, but she steals the screen every moment she gets. Englund and Shaye truly kick the performances up several notches! Everyone in this movie looks as if they are having the time of their lives playing these ridiculous characters. The central ensemble cast is a lot of fun to watch too! Whereas it would be too easy and boring to have an ensemble cast of flat college student characters, there is a little depth to each of them. Amongst the ensemble cast of college students is a gay character (Ricky) whom I applaud for not being a stereotype as he looks, talks, and acts like just one of the guys (who happens to have a different sexual preference). And another character I want to highlight is Cory. He certainly looks and acts like a nerd, but he is just as accepted as a sexual object as his more frat-boy looking counterparts. Each of the college students acts uniquely, so it never feels that any one character’s actions and dialogue could be given to another character and it play out the same.