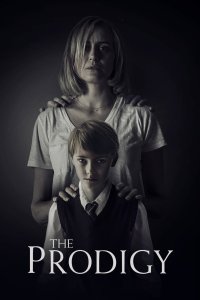 The Omen meets Child’s Play. When the trailer first dropped for The Prodigy, I was intrigued. Didn’t think that it was going to be great, but I was anticipating it as one of the horror movies I was looking forward to most in 2019, with others being Pet Sematary, Us, Midsommar, and IT: Chapter 2. Then I began to read the reviews of the movie, and was disappointed in what was being said. Since I wanted to get the oil changed in my car yesterday, with it being a weekday holiday off from work, I went to the auto center close to the theatre so I could drop it off and walk to the theatre for a movie. Decided to go ahead and watch The Prodigy, as the alternatives for watching were ehh, at best. To be honest, this was quite the terrible Presidents Day weekend at the movie theatre. The Prodigy certainly has some good things going for it, most of the violence is either psychological or off screen to allow you to fill in the disturbing details in your mind; it is also incredibly chilling! Unfortunately, the vapid characters and paint-by-numbers plot keep the film from achieving what it so desperately wants to achieve. Lots of great material here for what could’ve been a solid horror film with a character that combines what we love about Damien and Chucky. For fans of both The Silence of the Lambs and The Exorcist, you’ll instantly notice the old school Orion Pictures logo from SOTL followed by the clearly red text on black background taken from Friedkin’s masterpiece.

Sarah and John Blume are thrilled when their young son Miles starts to show signs of rapid development and extreme intelligence. Their family bliss soon turns into a living nightmare when Miles’ behavior becomes increasingly erratic and violent by his eighth birthday. After seeking help from two experts, Sarah is horrified to learn that her beloved prodigy may be under the grip of a dark and supernatural force. Fearing for her family’s safety, Sarah must choose between her maternal instinct to love and protect Miles and a desperate need to investigate what or who is causing his dark turn. She is forced to look for answers in the past, taking the audience on a wild ride; one where the line between perception and reality becomes frighteningly blurry

There is nothing wrong with jump scares. That’s right. You may hear of jump scares talked about in a less than favorable way; but it’s not the concept of the jump scare itself that is bad for horror (or any genre for the matter). The inclusion of some jump scares can be an element that aids in creating the physiologically engaging horror movie experience. It is the misuse, overuse, and poorly timed jump scares that work against the success of a movie or, more specifically, keeping it from reaching the critical potential that it could. It comes down to the argument of suspense versus shock. Now, a horror movie cannot be completely void of shock because then it differs little from suspense-thrillers. One of the main differences between suspense/thrillers and horror films is the intent of the writer and/or director–it’s that intent to horrify that separates thriller from horror. It’s this intent to horrify that places the often genre contested The Silence of the Lambs more in the horror category than thriller (though, it is a hybrid). Simply stated, The Prodigy is overstuffed with jump scares. When a writer or director relies upon jump scares to deliver the horror instead of crafting lingering horrifying moments through the character or plot development, then it plays as a shallow story. Strip away the jump scares, and The Prodigy is left with little to deliver. Think of a horror film supported by proliferated jump scares as a chocolate Easter bunny or egg that is hollow on the inside. It looks tasty, may even taste good (especially if made out of dark echolocate), but when you realize that the center is hollow, the experience is mitigated from where it could’ve been with a solid dark chocolate bunny.

I remarked to another horror fan on Twitter that with a few tweaks, The Prodigy could have actually been good–not great–but good. When you’re channeling what made The Omen and Child’s Play work so well, you have a lot of good material to create an original expression of these premises. One of the best parts of the movie, and one that was seriously creepy and unnerving is the performance of Jackson Robert Scott as Miles. He delivers an outstanding performance with his two contrasting identities; unfortunately, he was not used to the extent that he could have been. Had screenwriter Jeff Buhler and director Nicholas McCarthy spent more time on developing the key characters and simplifying the plot, then the movie may have been better received horror fans and general audiences. Although the movie is titled The Prodigy, the intelligence of Miles is mostly used as a McGuffin. Developed by Hitchcock, it’s a device that is used to jumpstart the central plot but has little to do with the plot itself. The best example of this is the money Marion steels in Psycho. Had she not stolen the money, she would not have stayed at the infamous Bates Motel. After that theft launches her on her roadtrip to Fairvale, it bares little consequence to the remainder of the events. However, the McGuffin IS important because it is what launches us into the thick of the plot.

Instead of all the jump scares, it would have been nicer for the movie to have worked to create an overwhelming sense of dread and keep the possession of Miles a secret longer. The film tips its hat too soon to some of the moments that should’ve been drawn out longer to increase the level of suspense. With a reliance upon jump scares to serve as a spectacle, I am reminded of researcher Linda Williams narrative vs spectacle argument. Too much spectacle, the film suffers because therein lacks any real substance; too much narrative, the film suffers because it fails to be driven as visually as it should. A horror film strikes a delicate balance between narrative and spectacle in order to achieve a compelling story with moments of terror that impact the audience emotionally and physiologically. The characters are not given the treatment that they should have been. We never truly care about any of the characters and thus do not form that important connection with the movie. Had the moments of shock been used to drive the plot forward more so than just work for a cheap scream of jump, then they would have had much more power than they did. And then there’s the ending. It plays off as showcasing a lack of imagination and more consideration paid to setting up a sequel. Without giving away any spoilers, there was a way for the ending to take a page out of the Child’s Play handbook in order to setup a sequel instead of the manner in which it did.

Looking for a popcorn horror movie to watch on a date or just one that will be fun for 1.5hrs, then this movie work perfectly fine. It will not impact you as The Omen or Child’s Play did, but it will deliver some fun thrills and a mostly original interpretation of a solid premise.