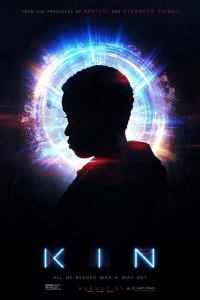 Too little plot spread across too much movie. Although I have not seen the short film Bag Man on which this movie is based, it is clear that there were many good elements in the short but unfortunately not enough plot, character development, nor turning points were added to take this short, and turn it into a feature length science-fiction urban fantasy movie. The pacing is inconsistent. My friend who screened the film with me last night likes to refer to this concept as the accordion dilemma. Long, drawn out boring parts that are quickly pushed together for an exciting moment, then stretched out again. Personally, watching this movie felt like sitting on the I-4 between Orlando and Tampa. There is also the concern that the film is depicting the wrong image for young men. One can easily read this movie as a troubled young man, with an ex-con brother and grieving father, who only feels powerful when he has a firearm at his side. Not the kind of message we want to send to young people. Had the film focussed more on character development, and the relationship between the two brothers, then this may have made a solid drama. As it stands, the film sits at an uncomfortable crossroads between genres that ultimately fails to deliver a memorable movie.

When salvaging one of the hundreds of vacant buildings in run-down Detroit, Elijah (Myles Truitt) stumbles across the remains of a battle between futuristic-looking soldiers. Near the soldiers is a powerful ray gun that he claims as his own. At home, his father (Quaid) is still grieving over the loss of his wife and troubled over the return of his other son, now ex-con Jimmy (Reynor). When Jimmy asks his father for $60K to pay off a gang that protected him in prison ran by Taylor Bolek (Franco), his father tells him to get a job. When Jimmy executes a plan to acquire the money by arranging a heist with the Taylor’s gang, and things go wrong, Jimmy finds himself on the run. Fearful for his brother’s life, Jimmy persuades Elijah to come on a road trip to Lake Tahoe where the plan is to meet their father later on. Soon, both brothers find themselves running for their lives from a sadistic gang and other-worldly soldiers. Fortunately, Elijah has a weapon that will do more than simply protect and destroy.

The Baker brothers have included many effective elements for telling their story in this film; however, proper pacing, a sense of urgency, character and plot development are not connected fluidly. Furthermore, there are many sequences of just driving–endless driving. Much like the Hobbit movies featured lots of scenes of running. My favorite scene in the movie is when Jimmy is teaching Elijah how to drive, and has him doing donuts in the parking lots of a seedy motel. The look on Elijah’s face was priceless, and it was in that moment that a real connection was felt between the brothers. Otherwise, the rest of the scenes in the movie are forgettable. Even the “sci-fi twist” that is referenced in marketing materials feels more like a mechanical explanation than a resolution that packs a punch.

Visually, the film worked. Clearly, the Baker brothers have sufficient experience at communicating messages through imagery–and no mistaking it–that is incredibly important to a motion picture. This is likely due to their experience in directing commercials, which successfully tell stories in 30secs or less. Unlike other science-fiction films that rely almost entirely on digital effects, in a refreshing manner, the Baker brothers pair the practical with the digital to create a sense of realism in the film. Even the futuristic weapons and other technology feel grounded in reality–they play by the same rules of physics we do. The film may suffer from a terrible screenplay; but it excels in areas such as cinematography and editing. Not entirely sure what possessed a studio junior executive to green-light this, but I imagine they won’t be green-lighting projects for a while now. From what I’ve been told about the short film, the ending of this feature adaptation was changed. My guess is that it was changed in order to setup a sequel–a sequel that we will probably never be seen if the film does poorly this weekend at the box office.

If you enjoy science-fiction urban fantasy movies, then you may find some entertainment value in this. The movie works better as the pilot to a limited run series on Netflix, Hulu, or Prime than a feature film. Perhaps that is where this story will wind up. With changes to the screenplay, it could find a life on a streaming service; but as feature film, it did not deliver the simple plot and complex characters needed.