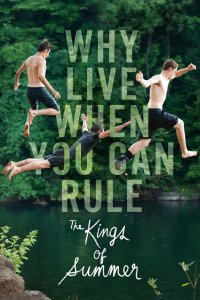 A unique coming-of-age story in the vein of Stand By Me. However, unlike the more conventional coming of age stories, the subtext and themes of then first-time feature director Jordan Vogt-Roberts’ film, written by Chris Valletta, are merely touched upon but seldom followed through in any meaningful way. The deadpan comedy and one-liners are simply tossed around instead of providing deeper meaning or introspect that may have increased the emotions felt throughout the movie. It’s a very surface level movie that fails to substantially deliver the dynamic quality narrative that is typically expected of these films. That isn’t to say that it is without merit; quite the contrary, it is enjoyable and is successful in taking you back to that time when you felt that no one understood you and you wanted to be treated like an adult, but still clung to the reckless freedom of hormonal youth. Understanding the consequences of one’s behavior is a regularly visited theme in the movie. With gorgeous outdoor cinematography and relatable characters, The Kings of Summer contains a little something for everyone who has ever thought of running away and building a cabin in the woods for you and your buds.

The Kings of Summer is about three teenagers Joe (Nick Robinson), Patrick (Gabriel Basso), and Biaggio (Moises Arias) who run away from their respective dysfunctional families and make a life for themselves out in the woods by building a house and living off the land. Ever since Joe’s mother died, he just does not get along with his father Frank (Parks and Rec‘s Nick Offerman). In turn, his father has anger and resentment issues he too is working through with the untimely passing of his wife. Unfortunately, Frank takes out his anger on Joe and both have nearly become alienated from one another. Making valid points about Joe’s behavior but not delivering those points with understanding, Frank and Joe just do not get along. With Patrick also not getting along with his helicopter parents (Megan Mullally and Marc Even Jackson), Joe convinces him to join with their new friend Biaggio and rule their own lives and answer to no one except each other. Forming a friendship pact, the three seem inseparable. However, even this three-fold cord has struggles and disagreements, jealously and rage. The young men are forced to work through life’s problems while dealing with the chemical and psychological changes of growing up.

Have you ever just wanted to escape life? Just quit and run away to a tropical island or mountain valley? That is just what you will encounter in The Kings of Summer. Coming-of-age stories are usually some of the films that find their way onto favorite lists or those to which so many people can relate because they deal with issues many of us face while in that transitional time from teenager to adult. From lakeside high school parties to hormones and independence, this film includes some of the various turning points and learning opportunities one likely encounters while discovering who he or she is. Ordinarily, films such as this, deliver the content in such a way that it offers deeper meaning or emotional connections in the narrative. And although there are some themes and moderate introspect, the film does not go far enough in connecting the audience with the teenagers or adults in the movie. There were several lines of dialog that alluded to potential conflicts and personal struggles that could have been revisited to offer more substance in the film. That being said, the writer and director do provide relatable characters who are each very different from the other in an effort to provide audiences with a character to whom they can identify. It is important for coming-of-age movies to not only contain relatable characters but relatable situations as well. And this movie does that, just not to the extent it had the capacity to do.

One of the interesting themes that can be read in The Kings of Summer is questioning one’s sexual orientation. Much like in Wes Craven’s A Nightmare on Elm Street 2, in which the protagonist’s sexual orientation is questionable, you can find similar themes in this film. Throughout the movie, Joe is regularly making speeches on and offering up pithy comments about masculinity. Quite regularly, Joe lectures Patrick and Biaggio about what it means to me a man. At times, Joe even becomes defensive when his masculine ways are questioned. As Shakespeare penned, “…thou doth protest too loudly…” It is entirely possible that Joe is struggling to come to terms with his sexual preferences. This could explain why he would go to such drastic measures to escape his rigid father in order to discover who he is when he has to provide for himself. Other supporting evidence of this theme is simply the fact that he doesn’t get the girl even though he tried much more than Patrick. When Patrick winds up with the girl, Joe is outraged and never quite gets over it. There are also the frequent trips to Boston Market instead of truly “being a man” and hunting for food. Maybe he’s simply trying too hard to deny who he is developing to be? Perhaps. But, there are additionally also other themes that can be read in this unique coming-of-age story.

Although this film did not receive the national attention in 2013 that it really should have, it is definitely one that is worth a watch if you enjoy this sub-genre of Drama. Ordinarily, ensemble casts can hinder effective character development and excellent storytelling, but the cast in this film is handled moderately well. If there had been more focus on the personal struggles or if the film included an external goal, then it would have definitely been better and perhaps more popular. Stories in general–especially visual stories–require the principle characters to not only have internal goals, but a clearly defined external goal as well. Often the external goal can echo the internal one, but it is important to show a tangible goal. Unfortunately, the latter is lacking in the diegesis of The Kings of Summer. This movie won’t likely ever have the nostalgia or cache of Stand By Me, but it does offer up a fun story with an excellent cast and some personal growth that will keep you entertained for the hour and a half runtime.