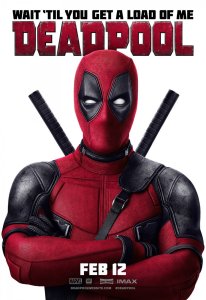 Absolutely brilliant super not-hero film! For those who often get the feeling that I simply do not like high-concept or superhero movies, let this be evidence that there certainly ARE superhero films that I feel are exceptional. And this is definitely one of those movies. As many memes across social media have indicated–and I will reiterate–this movie is NOT for kids (and no, your kids are not the exception). This is a super not-hero [and the not is important, but you must see the movie in order to understand] movie that is written for a mature audience. From the groundbreaking self-aware opening credits to the perfectly paced and strategic adult-humor, this movie is sure to have you laughing from beginning to end. And it’s not just the writing that is super but the visual effects, stunt sequences, and fight scenes are far above par for this action movie genre. Ryan Reynolds captures the character of Deadpool so incredibly effectively that you will swear that he was made for this role. Not your Disney-Marvel movie, Fox and Marvel bring you a spectacular combination of action and comedy to show off this unique anti-hero, so to speak, for fans of the comic and those who just enjoy a super movie.

Former special forces Wade Wilson (Reynolds) leads a very interesting post-dishonorable discharge life as a mercenary. The last man you’d ever expect to fall in love with anyone, Wilson falls for a burlesque dancer (who most likely moonlights as a hooker–let’s be honest). Following months of unparalleled passion and ecstasy, and after the unconventional proposal, Wilson finds out that he has an aggressive form of cancer that is unfortunately late in discovery. Devastated, Wilson has no idea what to do, but does not want his fiancé to have to go down the cancer road with him even though she clearly states that she is in it for the long haul. Acting upon a chance meting with a mysterious and well-dressed man in a bar, Wilson takes the man’s advice and undergoes a treatment from another equally mysterious but more sinister scientist. The results of the treatment will become clear as Wade Wilson becomes Deadpool and develops into the most unusual super anti-hero ever to come to the screen.

Simply from the opening credits, it is clear that this movie is incredibly self-aware and playing to the audience one hundred and ten percent. BEST opening credits ever, in terms of creativity and being an extension of the narrative itself. The idea of a self-aware movie is not a common one to begin with and certainly not a trope of traditional superhero movies. I think that is what I appreciated most about the movie. The brilliance behind the self-awareness is that the film is equally self-aware as it does take itself seriously as a superhero movie. Never before have I witnessed the fourth wall being broken so incredibly much. For those of you who do not know what breaking the fourth wall is, in its simplest form, it is when the character addresses the audience. This is apparently an element that was brought over from the comic, according to my comic and anime enthusiast coworker that went with me to screen the movie last night. What makes Deadpool’s continuous commentary so effective and entertaining is the fact that he says what many of us would be thinking given if we encountered the same scenario. The candor is such a breath of reality within this world of fantasy or augmented reality.

So often a movie will either choose to rest upon its strong writing, impeccable acting/direction, or visual effects; the sheer remarkable innovation in this movie is supported by not one but all the aforementioned elements. Ordinarily, I am able to find flaws in a movie–especially within the superhero genre–but not this time. I suppose, the fourth wall was broken a little too much, but that would be the only flaw I could identify. Sometimes a movie can be a great superhero movie but not a great film; however, Deadpool exceeds expectations both as a superhero movie and as a film in and of itself. At first thought, you may feel that a movie with endless diegetic and non-diegetic commentary may overshadow or steel attention or coherence from the narrative itself, but the writers did such a fantastic job of integrating the narrative and commentary so seamlessly that the movie is doubly entertaining as it would be without the offensive, explicit, hormonal commentary from the earthiest and most human of superheroes. And yes, I realize I am using superhero even though Deadpool reminds me over and over again that he is not a hero, but you get the idea.

Ryan Reynolds is one of those actors who is equally talented as he is attractive, and he gets to show off for this movie in ways that many actors wish they could in movies. But, it does not come off as obnoxious at all. That’s the beauty in the direction of this movie. You’d think that his over sexualizing of himself and the continuous adult commentary that he (or the movie) would play off as exceedingly obnoxious, but you’d be mistaken. There is a perfect balance struck by the writers and director that enable Deadpool to be a total douchebag, but oddly enough, in the most endearing way. For fans of the X-Men comics, 90s cartoon, or the X-Men movies, you will get to witness a crossover of movies in Deadpool. In an ever growing effort to recruit Deadpool to join the elite mutant force lead by Charles Xavier, Colossus and Negasonic Teenage Warhead confront Deadpool. This subplot is an important elements to Deadpool because it helps to build Fox’s X-Men universe by bringing two franchises.

Without getting into a lot of IP (intellectual property) rights discussion, despite the procurement of Marvel in 2012, as long as Fox keeps making X-Men movies, Sony makes Spiderman movies (even though he is appearing in the Avengers series), and Universal Studios Florida keeps modifying and improving attractions, then Disney does not have the rights to use the respective characters in movies or rides. Now, IP rights are a little more complicated than that, but I wanted to provide you with a general idea. Back to the crossover. Including the X-Men in Deadpool is strategically important for three simple reasons: (1) as I mentioned earlier, it helps to rebuild and reinforce the respective timelines of both franchises (2) it builds the foundation for a larger character universe, much in the same way Disney is doing with the Avengers and related movies and (3) part of what makes Deadpool so incredibly fascinating is his ability to play the anti-hero off of legitimate superheroes or, as Fox is able to officially call them, mutants.

If you are a fan of Disney-Marvel’s Guardians of the Galaxy, and you are NOT a kid, then you will definitely enjoy Fox-Marvel’s Deadpool. Prepare yourself to experience a superhero-action movie like no other. From being mesmerized at the stunning visual effects and editing to the incredibly funny writing and acting, you are sure to be entertained and will definitely crave more. Good thing that Deadpool has already received the green light for a sequel.