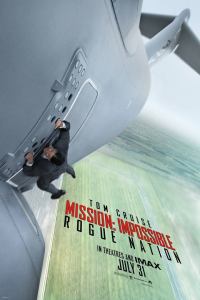 Mission: Resurgent. The fifth installment in the Mission: Impossible franchise is surprisingly good. Ordinarily, this far into a franchise, the stories and plots can begin to suffer; but, Paramount Pictures continues the TV series turned cinema powerhouse with great promise for a continued successful run. I don’t think the Mission: Impossible library will ever have quite the allure that James Bond has, but it fairs better than the Bourne franchise. All three definitely perform well, but Mission: Impossible is unique in that Tom Cruise truly sells the movie. Unlike in Hollywood’s Golden Age (~1920s-50s) when particular actors were truly regarded as stars and would essentially sell the movie to audiences and investors, most of today’s movies are not built on the backs of particular fixtures in the star system. There are a few exceptions out there, but Tom Cruise is definitely an actor that is as close to an old-fashioned movie star as we can see and have in contemporary cinema. If you’re looking for a great popcorn movie that you can just chill-ax at, then checkout the latest movie in this unkillable franchise.

With the IMF now disbanded and Ethan Hunt (Tom Cruise) out in the cold, a new threat — called the Syndicate — soon emerges. The Syndicate is a network of highly skilled operatives who are dedicated to establishing a new world order via an escalating series of terrorist attacks. Faced with what may be the most impossible mission yet, Ethan gathers his team and joins forces with Ilsa Faust (Rebecca Ferguson), a disavowed British agent who may or may not be a member of this deadly rogue nation. (IMDb, 2015).

Due of the very nature of these movies, I don’t feel it necessary to pick apart the plot because it is purposely high concept and requires the audience to engage in a momentary suspension of disbelief in order to enjoy the action and adventure. That being said, the movie is pretty solidly acted, written, shot, and directed. I was a little disappointed in that the most impressive sequence of events, involving the plane taking off with Ethan hanging on for dear life, is right at the beginning of the film and everything else pales in comparison. It follows a fairly standard order of tropes common to high concept espionage-action-adventure films. Despite the very contemporary nature of this espionage movie, there is a classic feel that is successfully woven throughout the narrative.