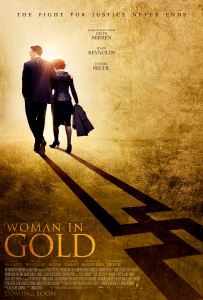 An absolutely beautiful film about art, history, and seeking justice. They say a picture is worth a thousand words, but The Weinstein Company and BBC’s Woman in Gold is demonstrably worth 120 pages of words. Woman in Gold is a powerful movie with a timeless, unparalleled story about returning Nazi-stollen art to its rightful owner. Veteran actors Helen Mirren and Ryan Reynolds deliver commanding performances in this film based on the true story of one of the cases in Austria’s Art Restitution program. Follow along for a compelling journey that is both an historic investigation and a gripping courtroom drama that goes all the way to the US Supreme Court. Witness one woman’s fight to have returned what is rightfully hers, but meeting with seemingly unsurmountable obstacle after obstacle along the way. Woman in Gold is one of those films that will quickly become a favorite of many because of the passion, beauty, and determination showcased in this true story about justice.

Woman in Gold begins with the death of Maria Altman’s (Mirren) sister. Following the funeral, she discovers paperwork that reveals that now-famous paintings, that once belonged to her family prior to the pillaging by the Nazis, are hanging in the Belgrade Museum in Vienna. Also at this time, the Austrian Government has initiated an Art Restitution program to return artwork to its rightful owners–art that was unjustly stolen and illegally acquired by the Nazis. The painting, known as Gustave Klimt’s Adele, is the Austrian equivalent of DaVinci’s Mona Lisa. Facing the daunting fight to get the painting back, Maria hires newly-minted lawyer Randol Schoenberg (Reynolds) to lead and advise her in her legal quest. Their battle will take them from Maria’s quiet Los Angeles bungalow to the bustling historic streets of Vienna, and eventually all the way to the US Supreme Court. Join Maria and Randol for an adventure to right a wrong that dates all the way back to WWII.

Women in Gold is a beautifully produced movie that comes complete with art, history mystery, and litigation. The bedrock of a film like this one requires an incredible screenplay, otherwise, it could turn out to be nothing more than a National Geographic or Smithsonian Channel docudrama special. Alexi Campbell’s screenplay is meticulously written to include both the present action paired alongside the historic events that lead up to the case, which would come to be known as Republic of Austria v. Altman (2004). It is important to note that movies that heavily use flashbacks can take away from the importance of the story at hand; but Campbell’s screenplay strikes a powerful balance between the two, keeping the present story center stage. Director Simon Curtis takes Campbell’s words and brings them to life for the screen. His ability to create a dynamic experience for the audience is showcased well in this film–he truly brings the audience into the world of Maria and her impossible battle for justice. Underscoring the visuals and the gut-wrenching words is an incomparable score by Hans Zimmer. He successfully pairs a classical sound with a modern flare to match the mood of the film set by Curtis, Campbell, and cinematographer Ross Emery in each and every scene.

Once again, Helen Mirren shines beautifully, as she always does, in the roles she plays.  Without a doubt, she was the best choice for this historic role. Her elegant mannerisms with her sharp tongue and quick wit bring Maria to life. The role of Maria is a complex one that required Mirren to have the faced of strength and determination whilst revealing vulnerability and frailty. Playing her counterpart, is the handsome and talented Ryan Reynolds as lawyer Randol Schoenberg. Reynolds was an excellent choice for the role because he can both deliver the character of an underdog lawyer and boyish charm concurrently. His chemistry with Mirren is evident in each and every scene. Even though most of the film is spent with just the two actors principally, the audience will never grow tired of their arguments and banter back and forth. Supporting the principle performers, is an excellent cast that creates the world in which this story of justice and love of art takes place.

For lovers or art and history, this is definitely a movie to catch while in theatres. Seeing the famous Klimt Adele on the screen is overwhelming at times. Thankfully, the world can still see the painting, acquired by Ronald Lauder, in the Neue Museum in New York City. Although this film has not received the attention it deserves, it could very well be one of the year’s first films on its way to an Oscar nomination since Oscars 2015 proved that movies, released early in the year, can make it all the way to the Academy Awards. If you enjoyed The Monuments Men, Big Eyes, or Museum Hours, you will likely fall in love with this film.