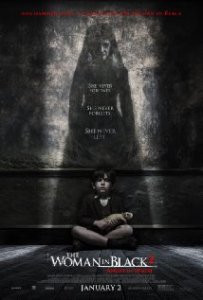 Return to the infamous Eel Marsh House in The Woman in Black 2: Angel of Death. This less terrifying sequel to the original neo-classic horror film is a fun horror movie to watch with friends. Like the previous installment, this film evokes memories and feelings of classically structured horror films. Although there are narrative issues and unanswered questions, this film hits the mark for creating an eerie feeling throughout the movie. To my pleasant surprise, the jump scares from the first movie are all but left out from this installment; however, there are some scary moments that are reminiscent of the original that are used effectively. This film is one that would have benefited greatly from being shot in greyscale (black and white) like the classic horror movies of the 1930s and 40s. With the camera changing from objective to subjective shots, it’s sometimes unclear whether the audience is watching the characters or looking through the eyes of someone more sinister, but that is part of what gives the movie its suspenseful flare.

The Woman in Black 2: Angel of Death is about a group of orphaned evacuees from London during the time of the bombings of World War II. Led by Jean Hogg (Helen McCrory) and Eve Parkins (Phoebe Fox), the children are brought to Eel Marsh house in the British countryside where they awaken the vengeful spirit of Janet Humphries once again. Having to face both the ghosts of the present and the ones from her past, Eve teams up with handsome pilot Henry (Jeremy Irvine) to discover the reason Janet has her eyes fixed on the recently orphaned Edward.

This is very much hit or miss horror film. Some fans of the original are definitely going to like it, and others are going to feel as if they wasted an hour and a half that could have been spent in another movie. In an effort not to spoil some of the plot for those who have not seen it, I won’t spend time on material that may give away some of what should be a surprise. BUT, there are definitely some plot points that were severely left undeveloped and should have been worked into the story much more effectively. As far as the acting, it is on par for this style of horror film, but is not nearly as good as acting Daniel Radcliffe was able to deliver in the previous movie.

As is a standard in classically structured horror films, this one comes complete with a light romance story between Eve and Henry. Thankfully, it is carefully worked into the plot in such a way that it is both believable and plays an important role towards the close of the movie. (Slight spoiler alert) Shockingly, this film did not hold back on placing children in perilous situations. Ordinarily, horror films featuring children do not often show children dying but this one plays that card very well and strikes a good balance.

Ultimately, The Woman in Black 2 fails to provide general audiences with a successful sequel to the original movie. Perhaps, had the studio shot the film in black and white, the film would have been better received. Underdeveloped characters, subplots, and a slow pace hurt this film and prevent it from appealing to most fans of horror. On the other hand, fans of the original or the book upon which the series is loosely based will likely enjoy this film.