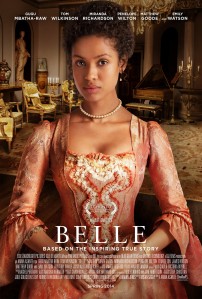 Definitely one of the best movies of the year! If you’re a fan of period romantic-drama, then you must see this movie. This film focusses on an area that is the source for the affluence of Jane Austen’s many characters but is never spoken of. Slavery and the slave trade in England. Like last year’s Lee Daniel’s The Butler, this movie will likely fly under the radar and see not a major win or nomination from motion picture awards. However, it is the first movie of the year that seriously deserves consideration for an accolade or two, including Best Actress, Best Picture, and Best Supporting Actor. Although, the placement of the movie in the calendar year puts it at a disadvantage compared to “Oscar” season, which is typically the Fall and Holiday Season.

Belle is inspired by the true story of Dido Elizabeth Belle Lindsay, the illegitimate mulatto daughter (born of one white and one black parent) of Admiral Sir John Lindsay. Through a series of events, Dido (as she is referred to 99% of the movie) comes to live at Mansfield Park with Lindsay’s uncle and aunt–Lord Chief Justice and Lady Mansfield. Dido’s aristocratic blood heritage affords her many privileges, not even the lower class white citizens of England enjoy as part of their lives; however, her mulatto racial status prevents her from the full life she is entitled to based on the traditions of the noble class social system. While her cousin Elizabeth chases suitors for marriage, Dido is left on the sidelines wondering if she will ever find love. After meeting an idealistic young vicar’s son bent on changing society, he and Dido help shape Lord Mansfield’s role as Lord Chief Justice to end slavery in England.

One of the most astonishing elements of this movie is the impeccable acting from nearly all the cast, and definitely the leads. Not that other elements aren’t worth highlighting first; but, of all the elements that make up a movie especially a period piece, the acting is key to the movie’s overall success at the box office. Playing the title role of Belle, actress Gugu Mbatha-Raw, portrays the character of Dido (Belle) passionately and with breathtaking grace. Her delivery and commitment to character is outstanding. After watching her performance in this movie, this newest actress of color’s career should be followed very closely. Unsure whether it’s director Asante’s ability to coax this powerful performance out of her or her inherent talent, there is no doubt that her screen presence in this film is huge. Although the central character is Dido, the most defined character arc and dynamic performance belongs to Tom Wilkerson in his portrayal of Lord Mansfield. Very few performers in the past have shown they can as effectively navigate the vast array of the character’s conflicted sentiments, as Wilkerson has demonstrated, throughout the course of his character’s transformation in the film. In addition to the stellar performances delivered by Dido and Lord Mansfield, they are supported by a cast equally committed to the authentic preservation of character.

Written by Misan Sigay, this romantic drama transcends the predictable outcome of love triangles often associated with period romance films–much in the vain of an Austen or Bronte adaptation. That thread is supplemented by the recurring themes of liberty and restriction. Director Amma Asante is a newcomer, but proves her ability to effectively craft a beautiful work of cinema in this film. Although some of the shots she chooses are to be expected and even cliche, they are outweighed by the many other shots and scenes she uses and the direction of the characters. But, she serves as a shining reminder that women, like Kathryn Bigelow, can be strong directors and take their movies to new heights. However, while Belle is of undeniable interest in many respects, its overall execution restricts it from being quite as engaging as it wants to and could have very well been. But, can serve as a solid foundation from which Asante can correct her short-comings and improve throughout her bright career.

From the moment the movie opens, it packs way too much into the first few minutes–to the point it feels rushed. However, the quick pace of the opening scenes to pave the way for a pace that will eventually settle into a nice rhythm. If you’re looking for a powerful dynamic period story of love and socio-political intrigue, this is the movie for you. In addition to having a solid story, you also get all the other requisites of a well-executed period drama: a strings-heavy score, lavishly designed costumes, and characters that show the flaws of humans and how they can change.